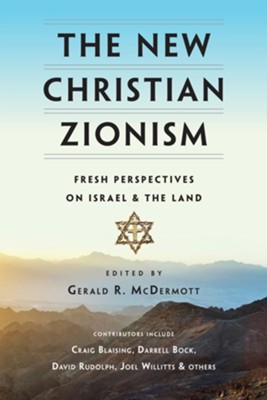 The New Christian Zionism: Fresh Perspectives on Israel & the Land

▼▲
Some scholars assume that Christian Zionism is the offspring of premillennial dispensationalism. But contributors to this collection contend that scriptural and theological connections between covenant and the land of Israel are nearly as close in the New Testament as in the Old---and propose a place for an integrated biblical vision for Christian Zionism in the 21st century. 304 pages, softcover from InterVarsity.

Can a theological case be made from Scripture that Israel still has a claim to the Promised Land? Christian Zionism is often seen as the offspring of premillennial dispensationalism. But the historical roots of Christian Zionism came long before the rise of the Plymouth Brethren and John Nelson Darby. In fact, the authors of The New Christian Zionism contend that the biblical and theological connections between covenant and land are nearly as close in the New Testament as in the Old. Written with academic rigor by experts in the field, this book proposes that Zionism can be defended historically, theologically, politically and morally. While this does not sanctify every policy and practice of the current Israeli government, the authors include recommendations for how twenty-first-century Christian theology should rethink its understanding of both ancient and contemporary Israel, the Bible and Christian theology more broadly. This provocative volume proposes a place for Christian Zionism in an integrated biblical vision.

Gerald R. McDermott (PhD, University of Iowa) is Anglican Chair of Divinity at Beeson Divinity School in Birmingham, Alabama. He is also associate pastor at Christ the King Anglican Church. His books include The Theology of Jonathan Edwards (with Michael McClymond), God's Rivals and The Great Theologians.

"In certain circles, the cause of Christian Zionism has acquired a bad odor. Some would-be sympathizers cringe at its history of dubious end-times speculation, while others want to avoid blessing the government and military policies of Israel. The theologians and historians included in this volume propose, as its titles suggests, a new Christian Zionism, grounded not in the belief that Israel is 'a perfect country' or 'the last Jewish state we will see before the end of days,' but in sound biblical theology and common-sense political wisdom."

"McDermott's questions are pertinent and valuable."

▼▲
I'm the author/artist and I want to review The New Christian Zionism: Fresh Perspectives on Israel & the Land.
Back