Skip to main content
CYBER WEEK SALE: Up to 88% off, thru 12/6. >
Christian Pilgrimage in Modern Western Europe
By: Mary Lee Nolan, Sidney Nolan
Stock No: WW843895 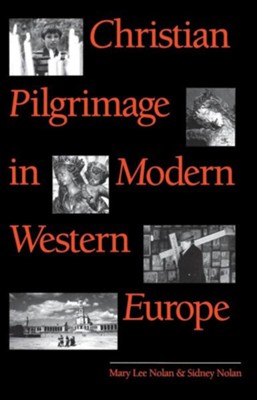 By: Mary Lee Nolan, Sidney Nolan
University of North Carolina Press / 1992 / Paperback
Write a Review
In Stock
Stock No: WW843895
Buy Item Our Price$56.20
In Stock
Quantity:
Stock No: WW843895
University of North Carolina Press / 1992 / Paperback
Quantity:
Add To Cart
of These in Your Cart

▼▲
"Christian Pilgrimage in Modern Western Europe" is a commanding exploration of the importance of religious shrines in modern Roman Catholicism. By analyzing more than 6,000 active shrines and contemporary patterns of pilgrimage to them, the authors establish the cultural significance of a religious tradition that today touches the lives of millions of people.

Roman Catholic pilgrimage sites in Western Europe range from obscure chapels and holy wells that draw visitors only from their immediate vicinity to the world-famous, often-thronged shrines at Rome, Lourdes, and F tima. These shrines generate at least 70 million religiously motivated visits each year, with total annual visitation exceeding 100 million. Substantial numbers of pilgrims at major shrines come from the Americas and other areas outside Western Europe.

Mary Lee Nolan and Sidney Nolan describe and interpret the dimensions of Western European pilgrimage in time and space, a cultural-geographic approach that reveals regional variations in types of shrines and pilgrimages in the sixteen countries of Western Europe. They examine numerous legends and historical accounts associated with cult images and shrines, showing how these reflect ideas about humanity, divinity, and environment.

The Nolans demonstrate that the dynamic fluctuations in Christian pilgrimage activities over the past 2,000 years reflect socioeconomic changes and technological transformations as well as shifting intellectual orientations. Increases and decreases in the number of shrines established coincide with major turning points in European history, for pilgrimage, no less than wars, revolutions, and the advent of urban-industrial society, is an integral part of that history. Pilgrimage traditions have been influenced by--and have influenced--science, literature, philosophy, and the arts.

"Christian Pilgrimage in Modern Western Europe" is based on ten years of research. The Nolans collected information on 6,150 shrines from published material, correspondence with bishops and shrine administrators, and interviews. They visited 852 Western European shrines in person. Their book will be of interest to many general readers and of special value to historians, cultural geographers, students of comparative religion, anthropologists, social psychologists, and shrine administrators.

▼▲
I'm the author/artist and I want to review Christian Pilgrimage in Modern Western Europe.
Back