Skip to main content
BRING CHRISTMAS HOME SALE: Save up to 85% through 11/2 >
The Bible in World Christian Perspective: Studies in Honor of Carl Edwin Armerding
By: W. Ward Gasque & David W. Baker
Stock No: WW834321 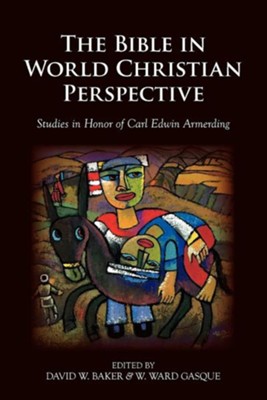 The Bible in World Christian Perspective: Studies in Honor of Carl Edwin Armerding

▼▲
The Bible is by far the most widely translated and circulated book in the world, and Christianity is by far the most globally dispersed religion. The Christian faith can no longer be said to be a Western religion. The axis of influence in the world Christian movement is now in the South and the East. Africa is home to the largest number of Christians, and now China, where a generation ago prospects for the faith looked most unpromising, represents the locus where the church is growing most rapidly.
Theological education has also changed radically in recent years. As the church has grown throughout the world, new forms of equipping both clergy and laity for ministry have sprung up to meet changing needs and circumstances.
Carl E. Armerding has played a major role in re-shaping theological education. He was a founding member of the faculty of Regent College, Vancouver, Canada (197091), a globally influential school of theology, and served as its second President (197788). Having given leadership to the college during the period of its greatest growth and the development of its beautiful campus, he invested the next decade- and-a-half of his life in providing innovative Christian higher education to a wide range of international students, especially those from Central and Eastern Europe, as the Director of Schloss Mittersill Study Centre, Austria (19912006), and at the Oxford Centre for Mission Studies (19912002). He continues to teach and to advise students associated with these three institutions, along with others around the world. This collection of essays by colleagues, former students, and friends is an expression of appreciation for the leadership he has given to Christianhigher education.
Among the contributors are Soo-Inn Tan (Singapore), Gordon D. Fee (Vancouver), Clark H. Pinnock (Hamilton, Ontario), James M. Houston (Vancouver), Michael Green (Oxford), Jeffrey P. Greenman (Wheaton), R. Paul Stevens (Vancouver), and Peter Shaw CB (London).
David W. Baker is Professor of Old Testament and Semitic Languages at Ashland Theological Seminary (Ohio) and is author, editor or contributor to more than forty books and author of many articles and essays.
W. Ward Gasque was a founding professor at Regent College and served as the first E. Marshall Sheppard Professor there. He is currently the English Ministries Pastor of Richmond Chinese Alliance Church.

▼▲
I'm the author/artist and I want to review The Bible in World Christian Perspective: Studies in Honor of Carl Edwin Armerding.
Back