Skip to main content
NEW CYBER DEALS Save up to 90% thru 12/12  shop now >
The Rise of Christian Theology and the End of Ancient Metaphysics: Patristic Philosophy from the Cappadocian Fathers to John of Damascus
By: Johannes Zachhuber
Stock No: WW859950 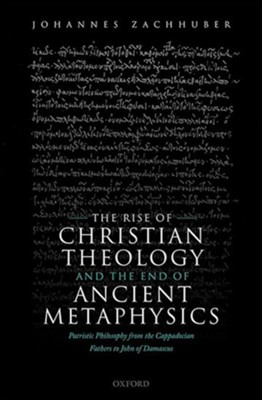 The Rise of Christian Theology and the End of Ancient Metaphysics: Patristic Philosophy from the Cappadocian Fathers to John of Damascus

It has rarely been recognized that the Christian writers of the first millennium pursued an ambitious and exciting philosophical project alongside their engagement in the doctrinal controversies of their age. The Rise of Christian Theology and the End of Ancient Metaphysics offers, for the first time, a full analysis of this Patristic philosophy. It shows how it took its distinctive shape in the late fourth century and gives an account of its subsequent development until the time of John of Damascus.

The book falls into three main parts. The first starts with an analysis of the philosophical project underlying the teaching of the Cappadocian fathers, Basil of Caesarea, Gregory of Nyssa, and Gregory of Nazianzus. This philosophy, arguably the first distinctively Christian theory of being, soon became near-universally shared in Eastern Christianity. Just a few decades after the Cappadocians, all sides in the early Christological controversy took its fundamental tenets for granted. Its application to the Christological problem thus appeared inevitable. Yet it created substantial conceptual problems.

Parts two and three describe in detail how these problems led to a series of increasingly radical modifications of the Cappadocian philosophy. In part two, Zachhuber explores the miaphysite opponents of the Council of Chalcedon, while in part three he discusses the defenders of the Council from the early sixth to the eighth century. Through this overview, the book reveals this period as one of remarkable philosophical creativity, fecundity, and innovation.

Johannes Zachhuber is Professor of Historical and Systematic Theology at the University of Oxford and Fellow of Trinity College, Oxford. He studied theology in Rostock, Berlin, and Oxford where he earned his DPhil in 1997. He has published Human Nature in Gregory of Nyssa (Brill 1999) and Theology as Science in Nineteenth-Century Germany (OUP 2013) as well as numerous articles mostly in the areas of late ancient Christianity and nineteenth-century theology.

▼▲
I'm the author/artist and I want to review The Rise of Christian Theology and the End of Ancient Metaphysics: Patristic Philosophy from the Cappadocian Fathers to John of Damascus.
Back