Skip to main content
The Christian Left: How Liberal Thought Has Hijacked the Church - eBook
By: Lucas Miles
Stock No: WW115057EB 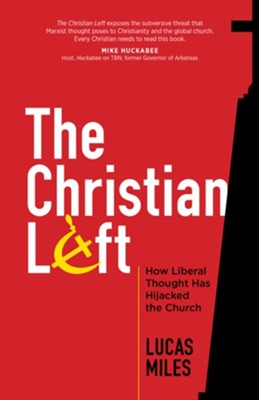 The Christian Left: How Liberal Thought Has Hijacked the Church - eBook

By: Lucas Miles
Broadstreet Publishing Group / 2021 / ePub
2.5 out of 5 stars for The Christian Left: How Liberal Thought Has Hijacked the Church - eBook (5 Reviews) Write a Review
In Stock
Stock No: WW115057EB

▼▲
The church has been invaded.

The Christian Left unveils how liberal thought has entered America’s sanctuaries, exchanging the Trinity of the Father, Son, and Holy Spirit for the trinity of diversity, acceptance, and social justice. This in-depth look at church history, world politics, and pop culture masterfully exposes the rise and agenda of the Christian Left. Readers will learn how to: Equip yourself with a firm understanding of issues facing the church today and become empowered to elevate God’s truth, justice, and wisdom.

▼▲
Lucas Miles is a trusted voice in the American church who has consistently addressed some of the most challenging topics in theology, politics, and culture. He is the host of Faithwire’s The Lucas Mile Show and a cohost of The Church Boys podcast, where he has interviewed some of the biggest names in media, such as Mario Lopez, Jim Kaviezel, Kathie Lee Gifford, Candace Bure, and Sean Hannity. Lucas and his work have been featured in books and on TV and radio programs, as well as syndicated in articles across both political and religious news outlets, such as The Blaze, Faithwire, Fox News, CBN, Bible Gateway, and The Christian Post. He is also the author of the critically acclaimed book Good God: The One We Want to Believe In but Are Afraid to Embrace.
An ordained pastor with over twenty years of ministry experience, Lucas has been involved in dozens of church planting efforts in the US and in remote locations in Latin America, East Africa, and Asia, not least of which is his local ministry, Nfluence Church, where he and his wife, Krissy, have been serving since planting the church in 2004. Lucas had the honor of receiving an invitation to the National Prayer Breakfast in Washington, DC, in both 2018 and 2020, as well as an invitation as a US delegate to the 2018 Ukranian National Christian Thanksgiving Celebration.
Additionally, Lucas is known for his work in Hollywood producing films and offering confidential pastoral support to many up-and-coming and established actors and artists. He has directed and produced several nationally released films, including Rodeo Girl, Crowning Jules, and The Penitent Thief, as well as consulted on dozens of entertainment and literary projects. His work has been featured on Netflix, Showtime, Fox, Redbox, Sony, and Pure Flix.
Lucas is a sought-after speaker at colleges, conferences, and churches on topics such as theology, Christian living, politics, and media. Whether he is preaching through the book of Romans or discussing trends in media and culture, Lucas’ heart for the gospel, philosophical prowess, and love of people always shines through, making him a perfect keynote speaker or lecturer for meetings of all sizes.
Lucas and his wife, Krissy, have been married since 2001 and reside in Granger, Indiana, with their Doberman, Kenya.

▼▲
The church is under siege at a doctrinal level. Leftists have invaded our sanctuaries and cathedrals, attempting to reframe the gospel to appease their distorted view of life and reality. The result is that many in the body of Christ are confused and ignorant of the truth. In The Christian Left, Lucas boldly addresses the problem head-on, calling out those in error and providing balance and love to help get us back on track. We need this book!
- Abby Johnson, Former Planned Parenthood Clinic Director; Founder, And Then There Were None and ProLove Ministries

While many have bravely addressed the disaster Marxism creates within the state, few have applied that same level of courage in calling out socialist dispositions dwelling in the pulpit. As a former pastor and conservative politician, I can attest that our nation’s churches need a voice like Pastor Lucas Miles’ to help cut through the sophistry of our clergy who have exchanged the gospel for an ideology that runs contrary to Christ. The Christian Left deftly captures the unique and subversive threat that Marxist thought poses to Christianity, as well as to our great republic. Every Christian in America needs to read this book.
- Mike Huckabee, Host, Huckabee on TBN; former Governor of Arkansas

Christianity is in stark opposition to socialism, which is why the Left will never be satisfied until they have reduced the cross to kindling and the church to ashes. More than ever, believers need to be informed and fully persuaded. We need more books like The Christian Left to help us be just that.
- Kevin Sorbo, Actor; Director; Producer; Author
Lucas Miles is the humblest pastor I’ve ever met. His authenticity and genuine love for others is what elevates his ministry and this book beyond just being commentary on the condition of our culture. The Christian Left is a love letter to a wounded nation and to future generations whose knowledge of our history has been twisted! In these days of confusion and deep divide, Pastor Miles reminds us that only the truth of the gospel will bring us the clarity we so desperately need.
- Stephen Baldwin, Actor; Author; Evangelist

Lucas Miles masterfully explores the slow drip of theological malfeasance that can steadily seep into the hearts and souls of believers, many times without their knowledge. His exploration of this slow and steady erosion of truth—one that is brought about through a malignant eclipse of biblical orthodoxy by a tragically deficient ideology of the self—is an essential read for any believer attempting to understand what in the world is happening in our world.
- Billy Hallowell, Author; Journalist

As a Lieutenant Colonel in the United States Air Force (retired), I’ve seen firsthand how Leftist policies have endangered our soldiers and jeopardized our national security. But as Miles expertly points out, the fallout from the Left also extends into our houses of worship and ultimately into the moral fabric of the family. Filled with rich historical references, piercing truth, and faith-filled hope, The Christian Left is capable of illuminating the way out of the dark void of modern progressive culture.
- Lieutenant Colonel Robert "Buzz" Patterson,  United States Air Force (Retired); White House Aide & Former Carrier of the Nuclear Football; Author, New York Times Bestseller Dereliction of Duty: The Eyewitness Account of How Bill Clinton Compromised America’s National Security
The twilight of Christianity has taken most Christians by surprise, but the truth is, it’s been coming for a long time. The West has been living off the fumes of a vibrant Christian civilization for the last hundred years, and the tragedy is, the demise of the church has been an inside job. In his remarkable new book, The Christian Left: How Liberal Thought Has Hijacked the Church, Lucas Miles does a masterful job of diagnosing the problem and mapping out exactly how it happened. If you’re frustrated at the lack of influence of today’s church and unsure what to do about it, then this book is for you. The clock is ticking, and it’s time to act.
- Phil Cooke, PhD, Filmmaker; Media Consultant; Author, Maximize Your Influence: How to Make Digital Media Work for Your Church, Your Ministry, and You

We’ve all seen how quickly socialist philosophies have worked their way into our American culture. But what many Christians fail to see is how quietly these mindsets have taken root in the church. Pastor Lucas systematically exposes the prevailing church doctrines that have contributed to a near pandemic of Christians embracing socialist thought and guides us to biblical solutions that will restore the church and save our country.
- David and Jason Benham, Best-selling Authors; Entrepreneurs

Lucas Miles pulls no punches in The Christian Left. No matter what side of the aisle you hail from, he delivers coherent, well-documented gut punches that help distill what it truly means to be a follower of Christ today.
- Jennifer Taylor, Actress, God’s Not Dead: A Light in Darkness

Pastor Lucas’ well-researched book, The Christian Left, points a firm but loving finger of biblical truth at the fallacies of the Left and the failings of the Right as they both attempt to define Christianity. Bound to push everyone’s buttons, Lucas offers sound Scripture-based solutions to the challenges pointed out in this amazing book!
- Edgar Struble, Producer, God Bless the Broken Road; Music Director, The Academy of Country Music Awards

As the Left continues to fabricate seemingly endless division and chaos, patriots and believers are no longer able to enjoy the luxury of staying silent or sitting on the sidelines. We must rise up in love and arm ourselves with the truth. In The Christian Left, Lucas Miles tackles faulty mindsets head-on and supplies an ocean of wisdom. We need more voices like Pastor Lucas Miles, willing to stand up for what they believe in.
- Brandon Tatum, Former Arizona Police Officer; CEO, The Officer Tatum; Founder, TatumReport.com; Christian Speaker & Social Media Influencer

It’s no secret that socialism has gained a significant foothold within the Democratic Party, but less noticeable, and perhaps even more concerning, is the silent rise of a social gospel among left-leaning pastors and Christian leaders. In The Christian Left, Miles unleashes a brave bright light of biblical truth upon the latent Marxist ideology present within the four walls of the church.
- Kevin McCullough, Syndicated Radio Talk Host; Columnist; Author

The Christian Left is a fascinating read, exposing what the Left has done to erode the truth of Christianity and the American way. Lucas is one of many Paul Reveres crying out in the night. He is not crying "the British are coming," but instead "the Marxists are coming." We would all be wise to listen.
- Brian Gibson, Pastor, HIS Church

▼▲
I'm the author/artist and I want to review The Christian Left: How Liberal Thought Has Hijacked the Church - eBook.
Back
Back