Skip to main content
CYBER WEEK SALE: Up to 88% off, thru 12/6. >
Gentile Christian Identity from Cornelius to Constantine: The Nations, the Parting of the Ways, and Roman Imperial Ideology
By: Terrence L. Donaldson
Stock No: WW871753 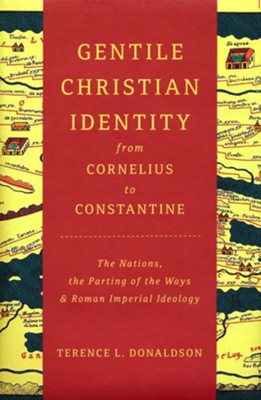 Gentile Christian Identity from Cornelius to Constantine: The Nations, the Parting of the Ways, and Roman Imperial Ideology

▼▲
What do we mean when we say "Gentile"? Donaldson traces the trajectory of its linguistic development, drawing on history, social identity theory, and competitive ethnography. Its evolutionary path coalesced in a parting of the ways from both Judaic practices and Roman imperialism, rendering the term pertinent in contemporary discussions of identity, ethnicity, and Christian-Jewish relations. 656 pages, hardcover from Eerdmans.

Originally an ascribed identity that cast non-Jewish Christ-believers as an ethnic other, "gentile" soon evolved into a much more complex aspect of early Christian identity. Gentile Christian Identity from Cornelius to Constantine is a full historical account of this trajectory, showing how, in the context of "the parting of the ways," the early church increasingly identified itself as a distinctly gentile and anti-Judaic entity, even as it also crafted itself as an alternative to the cosmopolitan project of the Roman Empire. This process of identity construction shaped Christianity’s legacy, paradoxically establishing it as both a counter-empire and a mimicker of Rome’s imperial ideology.

Drawing on social identity theory and ethnography, Terence Donaldson offers an analysis of gentile Christianity that is thorough and highly relevant to today’s discourses surrounding identity, ethnicity, and Christian-Jewish relations. As Donaldson shows, a full understanding of the term "gentile" is key to understanding the modern Western world and the church as we know it.

▼▲
Terence L. Donaldson is Lord and Lady Coggan Professor Emeritus of New Testament Studies at Wycliffe College in Toronto. He is also the author of Jews and Anti-Judaism in the New Testament and Paul and the Gentiles.

▼▲
"In this learned and thought-provoking book, Terence Donaldson traces the Christian usage of the term ethnē (nations) from its beginnings in the New Testament to the early fourth century. He shows how it became a tool in the hands of various Christian authors to create an imaginative universe in which Christians negotiated their identity both in relation to non-Christian Jews and the Roman Empire. As such, the book touches upon a range of issues central to early Christian history and presents an entangled and ambivalent tale with ongoing relevance today."
— James Carleton Paget
University of Cambridge

"Scholars of early Christian history have long recognized the transformative impact of gentile Christianity on the subsequent development of Christian identity. Donaldson brings to this topic the depth of research and analysis, the good judgment, and the good writing that characterize all of his work. This book is a must-read for anyone interested in ’the parting of the ways,’ the situation of Christianity both within and over against Roman imperial ideology, and, above all, ethnicity as a descriptive, analytical, and polemical category in early Christianity and beyond."
— Adele Reinhartz
University of Ottawa

"If the Jesus movement originated as a small and insignificant Jewish group, how do we explain the rise of Christianity as a religion not only set apart from Judaism, but also as one that displaced paganism and conquered the Roman Empire from within? In this seminal book, meticulously researched, Terence Donaldson shows how Christian identity formation in the early centuries took place in the intersection between the ethnic, the religious, and the political. It is a monumental achievement that is sure to reshape the way we understand the nature and origin of Christianity. Furthermore, it offers critical implications for how we may conceive of the continuing development of Christianity today, beyond the anti-Judaism and triumphalism that became interwoven with the message as the movement expanded in the empire. Highly recommended!"
— Anders Runesson
University of Oslo

"The New Testament and early Christian writers speak of ’gentiles.’ But what would the people so labeled have made of the term? How did ’gentile’ Christians understand their identity? And what part did the word ’gentiles’ or ’nations’ (ethnē) play in the construction of this identity with respect to Jews and Judaism on the one hand and the Roman Empire on the other? In his discussion of the emergence and development of a distinctively ’gentile’ Christianity, Donaldson traverses and sheds much light on a range of debated issues, including ’the parting of the ways,’ ethnicity and identity, and the Roman imperial context for early Christian life and development. This important and highly significant book is vital reading for all those interested in Christian origins and in the development of early Christian life and identity."
— Paul Trebilco
University of Otago, New Zealand

▼▲
I'm the author/artist and I want to review Gentile Christian Identity from Cornelius to Constantine: The Nations, the Parting of the Ways, and Roman Imperial Ideology.
Back
Back