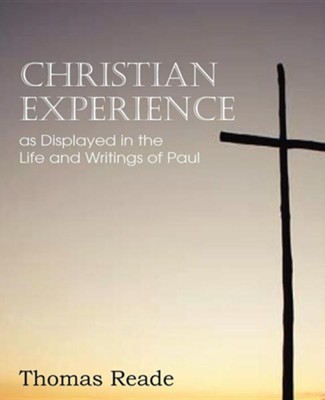 Christian Experience, as Displayed in the Life and Writings of Paul

▼▲
This little treatise has no pretensions to novelty, being on subjects which form the daily meditation of the devout Christian, and from which he derives his purest enjoyment; neither does the Author presume to vie with those, whose works on the life of Paul, have enriched the stores of Sacred Literature. To the spiritual reader, no apology would be requisite, for the numerous extracts which are inserted from the writings of Paul. These form the intrinsic value of the work. They are precious Jewels, however humble may be the casket in which they are conveyed. What language can so well describe the inward joys and griefs of the Apostle, as his own heart-felt addresses to the churches of the saints. By them he being dead yet speaks. May He, whose Power is manifested the weakest instruments, be pleased to render this humble tribute of affection to His cause subservient to the purposes of His glory.

▼▲
I'm the author/artist and I want to review Christian Experience, as Displayed in the Life and Writings of Paul.
Back