Skip to main content
BRING CHRISTMAS HOME SALE: Save up to 85% through 11/2 >
Christian Ethics and the Church: Ecclesial Foundations for Moral Thought and Practice
By: Philip Turner
Stock No: WW097072 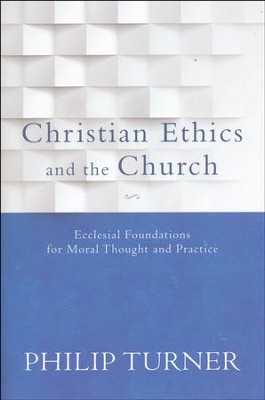 Christian Ethics and the Church: Ecclesial Foundations for Moral Thought and Practice

▼▲
Christian Ethics and the Church introduces Christian ethics from a theological perspective, spelling out the implications of moral theology for the common life of the church.

Philip Turner, a leading expert in the field, explores the intersection of moral theology and ecclesiology, arguing that the focus of Christian ethics should not be personal holiness or social reform but how Christians are to live with one another. The life of the soul and the life of society are matters of concern for Christians, of course, but "the originating locus of Christian ethics lies properly within the interior life of the church rather than in the interior life of the soul or the moral state of society," says Turner. A theology of moral thought and practice must take its cues from the notion that human beings, upon salvation, are redeemed and called into a life oriented around the community of the church.

Christian Ethics and the Church distills a senior scholar's life work and will be valued by professors and students of Christian ethics, theology, and ecclesiology.

▼▲
Philip Turner (PhD, Princeton University), now retired, is an Episcopal priest and the author or editor of several books. He lives in Austin, Texas. He previously taught at the General Theological Seminary in New York and served as dean of Berkeley Divinity School at Yale University.

▼▲
Wise in format, thought, and counsel, clear and charitable in expression, and comprehensive in scope, Philip Turner's book brings a lifetime of scholarly reflection, churchly hands-on living, and missionary experience to this refreshing project on Christian ethics. His is an effort to reorient the ethical life away from self and toward the graces and challenges of Christian fellowship in communion. The reader is taken on a thoughtful journey of patient reconfiguration into Christ's body for the sake of the world.
-Christopher Seitz,
senior research professor of biblical interpretation, Wycliffe College, University of Toronto

H. Richard Niebuhr's theme of Christ transforming culture was enormously influential in Christian ethics during the last half of the twentieth century. Whatever its usefulness then, Philip Turner argues that in a culture where faith is increasingly pushed to the margins, the church's common life must now be the focus of Christian moral reflection. Turner develops this argument in detail and in prolonged conversation with the New Testament witness. His is not, however, an argument for withdrawal from the larger society; rather, he believes that only a church that has discovered its calling can understand its civic and political responsibilities. This is a deeply thoughtful book, the fruit of years of reflection and experience, and it deserves to be read by anyone who wants to think seriously about the shape of a life in Christ.
-Gilbert Meilaender,
Valparaiso University

From African missionary to professor to seminary dean and president, Philip Turner now presents his life's work in living into and giving voice to the distinctiveness of Christian ethics. Catholic in nature, evangelical in mission, Turner's sustained argument is that life in Christ is centered in what it means to be the church and what that means for being in the world. Chapters on alternative theological visions and on moral choices in the public sphere make this a rich argument about the Christian moral life and a text that can also serve well in an introductory course in Christian ethics.
-Timothy F. Sedgwick,
Clinton S. Quin Professor of Christian Ethics, Virginia Theological Seminary

▼▲
I'm the author/artist and I want to review Christian Ethics and the Church: Ecclesial Foundations for Moral Thought and Practice.
Back
Back