Skip to main content
Christendom and Christianity in the Middle Ages: The Relations Between Religion, Church, and Society
By: Adriaan H. Bredero, Reinder Bruinsma
Stock No: WW849922 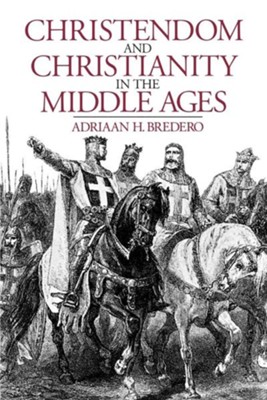 Christendom and Christianity in the Middle Ages: The Relations Between Religion, Church, and Society

Though buffeted on all sides by rapid and at times cataclysmic social, political, and economic change, the medieval church was able to make adjustments that kept it from becoming simply a fossil from the past rather than an enduring institution of salvation.

The dynamic interaction between the medieval church and society gives form to this compelling and well-informed study by Adriaan Bredero. By considering medieval Christianity in full relation to its historical context, Bredero elucidates complex medieval realities — many of which run counter to common modern notions about the Middle Ages. Bredero moves beyond the usual treatment of history by framing his overall discussion in terms of a fascinating and relevant question: To what extent is Christianity today still molded by medieval society?

The book begins with an overview of religion and the church in medieval society, from the early Christianization of Western Europe through the fifteenth century. Bredero counters earlier romanticized assessments of the Middle Ages as a thoroughly Christian period by arriving at a definition of Christendom, not in its original sense as the empire of Charlemagne, but rather as "the countries, people, and matters which stood under the influence of Christ."

▼▲
Heiko A. Oberman
—University of Arizona
"When this book was first published, it was hailed throughout Europe for its broad grasp of medieval religious history. Today it continues to be a frontline study because of its discriminate use of saintly legends, reported miracles, and records of a large variety of reform movements. In this way Adriaan Bredero succeeds in providing insight into medieval daily life and its sense of human life suspended between heaven and earth."

John R. Sommerfeldt
—University of Dallas
"Adriaan Bredero's book is a monumental and largely successful attempt to synthesize a period of ten centuries in the intellectual and social life of the church. No doubt specialists will disagree with elements in that synthesis, but no serious reader will be able to ignore it, and few will fail to admire Bredero's effort. Though Bredero is a Catholic, he rejects any romanticizing of the medieval church and medieval society; he rather applies the highest standards of critical research to his topic."

Uta-Renate Blementhal
—Catholic University of America
"I am very pleased that Adriaan Bredero's work is now available in English translation. His studies of the Cluniac and Cistercian orders and their interaction are well known in Europe, and medieval monasticism is a very popular topic among students. It is wonderful to have additional fine scholarship in this area."

Robert Somerville
—Columbia University
"An informative study about medieval Latin Christianity and its relation both to the Roman Church and to medieval society at large. . . . No serious student of the Christian Church or the Middle Ages should ignore Bredero's results."

▼▲
I'm the author/artist and I want to review Christendom and Christianity in the Middle Ages: The Relations Between Religion, Church, and Society.
Back