Skip to main content
With Christ in the School of Prayer, Mass Market Paperback
By: Andrew Murray
Stock No: WW85336 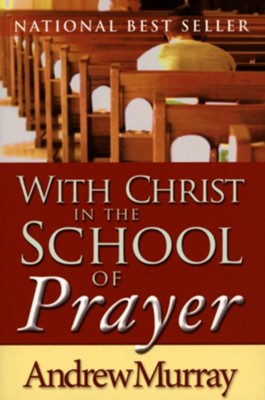 With Christ in the School of Prayer, Mass Market Paperback

▼▲
Immerse yourself in this timeless classic and prepare yourself for one of the most vital ministries believers can experience---intercessory prayer! Using Jesus' teaching on prayer as a model, Murray begins at the elementary level and leads you step by step through 31 lessons to the heights of faith-empowered prayer.

▼▲
To Andrew Murray, prayer was more than a means of maintaining the Christian life. He believed prayer was the highest work entrusted to man by God, the root and strength of all our other work in Him. It is only through prayer that the believer taps into the Source of highest power.
Murray discovered that it is Christ who teaches us to pray. The more we abide in Him and grow into His likeness, the more our lives will become like His. Enter into Jesus’ "school of prayer" and you, too, will&hellip;It was Murray’s heartfelt desire that all Christians would enroll in a personal session With Christ in the School of Prayer.

▼▲
A myriad of genuinely good books have been written on prayer, one of the best being Andrew Murray’s classic With Christ in the School of Prayer. We would do well to read widely and experience deeply if we desire to know the ways of prayer.
-Richard Foster, author of Celebration of Discipline

▼▲
I'm the author/artist and I want to review With Christ in the School of Prayer, Mass Market Paperback.
Back
Back