Skip to main content
The Day Christ Died as Our Passover: A Harmony of Events at the Death of Christ with the Annual Jewish Passover - eBook
By: Jack Langford
Stock No: WW42385EB 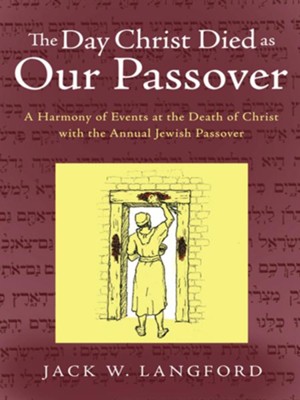 The Day Christ Died as Our Passover: A Harmony of Events at the Death of Christ with the Annual Jewish Passover - eBook

The subject of which day Christ died began to be hotly debated a few hundred years after His death. In the council of AD 325, the leaders of the Roman “Imperial Church” thought it to be in the best interest of the Church to disassociate their ritual celebration of the death and resurrection of Christ, which they now called “Easter,” away from the annual Jewish Passover event. They actually wanted to divert attention from the Jewishness of Jesus. In doing so, these “fathers” guided Christendom away from the biblical reality as expressed by Paul—“Christ our Passover was sacrificed for us” (1 Corinthians 5:7). This error has been locked into the celebration for over 1,600 years, not only by the Roman Catholics, but also by most of Protestantism.

This is a fresh study which will have some surprises for most students of the subject, due to the controversy surrounding the chronology. It will re-align the death of Jesus Christ squarely upon the biblical setting of the Passover theme as presented in the gospels. Above all, it will demonstrate beyond any shadow of a doubt that the four gospels harmonize perfectly on the subject. It also establishes that Christ died precisely on the eve of Passover, when the lambs were being sacrificed in the Temple services.

This Bible study will —

About the Author
Early in his ministry, Jack W. Langford stepped outside the traditional man-made religious organizations in Christendom and served the only Church that Christ is building—”the church which is Christ’s body”—(1 Cor. 12:13 and Eph. 4:1–4). He exemplified a Bible-teaching ministry, conducted several radio programs, held public discussions with both atheists and cult leaders, and traveled to several different countries. For the last twenty years, he has researched and written many biblical studies on a wide variety of subjects. Many of these are available at www.SeparationTruth.com.

▼▲
I'm the author/artist and I want to review The Day Christ Died as Our Passover: A Harmony of Events at the Death of Christ with the Annual Jewish Passover - eBook.
Back
Back