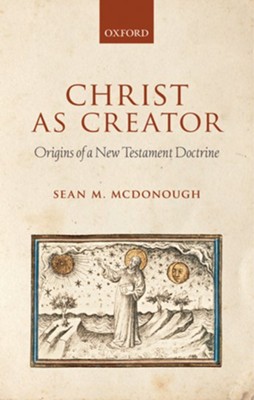 Christ as Creator: Origins of a New Testament Doctrine

▼▲
This book examines the New Testament teaching that Christ was the one through whom God made the world. While scholars usually interpret this doctrine as arising from the equation of Jesus and the Wisdom of God, Sean McDonough argues that it had its roots in the church's memories of Jesus'
miracles. These memories, coupled with the experience of spiritual renewal in the early church, established Jesus as the definitive agent of God's new creation in the New Testament writings and the teachings of the Early Church.

Following the logic that 'the end is like the beginning' Christ was taken to be the agent of primal creation. This insight was developed in light of Old Testament creation texts, viewed from within a 'messianic matrix' of interpretation. God gives his Word, his Spirit, and his Wisdom to his Messiah
from the very beginning; and the Messiah, the radiance of God's glory, establishes the cosmos in accordance with God's purposes. Creation is the beginning of messianic dominion; he rules the world he made.

McDonough carefully substantiates his thesis through a detailed exegesis of the relevant New Testament texts in the context of related texts in Judaism and Greco-Roman philosophy. He concludes with a survey of the doctrine of Christ as Creator in the work of six theologians: Justin Martyr,
Irenaeus, Athanasius, Karl Barth, Jürgen Moltmann, and Wolfhart Pannenberg.

▼▲
"This book is admirabley clear and largely compelling"--Daniel Elbert, Cederville University
"A detailed bibliography, ancient source, modern author, and subject indices round out this well informed and well argued volume...I'd highly recommend it...."--Nick Norelli
"Undoubtedly an important addition to the study of NT Christology."--Journal for the Study of the New Testament

▼▲
I'm the author/artist and I want to review Christ as Creator: Origins of a New Testament Doctrine.
Back