Skip to main content
BIG SUMMER BLOWOUT: Over 2,000 deals ~ up to 85% off, through 8/16. Shop now >
Christ and the Common Life: Political Theology and the Case for Democracy
By: Luke Bretherton
Stock No: WW881793 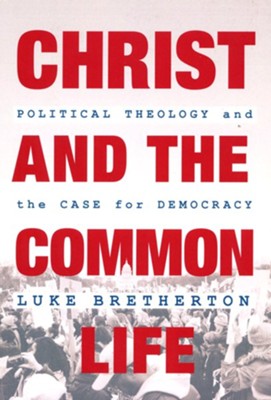 Christ and the Common Life: Political Theology and the Case for Democracy

In Christ and the Common Life Luke Bretherton provides an introduction to historical and contemporary theological reflection on politics and opens up a compelling vision for a Christian commitment to democracy.

In dialogue with Scripture and various traditions, Bretherton examines the dynamic relationship between who we are in relation to God and who we are as moral and political animals. He addresses fundamental political questions about poverty and injustice, forming a common life with strangers, and constructively transforming asymmetries of power. And through his analysis of debates concerning, among other things, race, class, economics, the environment, and interfaith relations, he develops an innovative political theology of democracy as a way through which Christians can speak and act faithfully within our current context.

Read as a whole, or as stand-alone chapters, the book guides readers through the political landscape and identifies the primary vocabulary, ideas, and schools of thought that shape Christian reflection on politics in the West. Ideal for the classroom, Christ and the Common Life equips students to understand politics and its positive and negative role in fostering neighbor love.

▼▲
Luke Bretherton is the Robert E. Cushman Distinguished Professor of Moral and Political Theology and senior fellow of the Kenan Institute for Ethics at Duke University. His other books include Christianity and Contemporary Politics: The Conditions and Possibilities of Faithful Witness, winner of the 2013 Michael Ramsey Prize for Theological Writing.

▼▲
"Luke Bretherton’s new book is a tour de force: with clarity, empathy, and impressive learning he maps out the many current forces that threaten the future of Western democracy, then turns to defend it once more from the perspective of the demanding Christian teaching on mutual love. Perhaps the most distinctive achievement of this volume is its capacity to straddle the debates on both sides of the Atlantic and to draw them into illuminating contrast. Written with incisive clarity and remarkable accessibility, this book is not only a scholarly achievement of great note, but it also is a useful tool for teaching and discussion in universities, seminaries, and churches."
— Sarah Coakley
University of Cambridge and Australian Catholic University, Melbourne

"Christ and the Common Life is a monumental achievement in Christian political theology. Demonstrating mastery of a huge literature and multiple, diverse sub-traditions of Christian political thought, and offering a disciplined constructive theological vision of his own, Luke Bretherton offers important, often breakthrough reflections on the most significant issues in this field. In the end, the book offers hope for the renewal of Christian engagement with democratic politics, all over the world. An indispensable contribution."
— David P. Gushee
Mercer University

"Luke Bretherton has written an impressively expansive, smart, and sophisticated introduction to Christian political theology. Each chapter offers refreshing new perspectives on important topics. Moreover, Bretherton brings together and guides us through a wide array of scholarly literatures, from secular political theory to the sociology of Pentecostalism to Hebrew Bible scholarship, while also developing his own distinctive, persuasive theological voice. Christ and the Common Life will surely set the agenda in the field for a generation to come, orienting Christian political theology in the direction of justice."
— Vincent Lloyd
Villanova University

"Luke Bretherton has been thinking hard about the polis, plurality/pluralism, and democratic citizenship for a long time. This erudite synthesis and expansion of [Bretherton’s] work over the last two decades brims with insights into essential and interrelated topics, such as secularity, toleration, economy, sovereignty, and populism. This book makes the case for democracy and establishes the framework for discussions in Christian political theology for the next quarter century."
— Amos Yong
Fuller Theological Seminary

"Breaking the spell long cast over political theology by Augustine’s vision of the two cities, Luke Bretherton reads faithful pilgrimage to the heavenly city through the lens of a different journey, that of a certain man going down from Jerusalem to Jericho, and the one who was his neighbor. Politics is neighboring, negotiating a common life between friends, strangers, enemies, and the friendless, and political theology requires a kaleidoscopic approach, brilliantly instantiated in this book, that disrupts canon, shifts geography, and eschews sovereign placement in favor of active listening. A transformative contribution!"
— Jennifer A. Herdt
Yale Divinity School

"Part of the intellectual achievement of this book is rendering political theology more understandable for everyday Christians. For the theological academy, it does something greater. . . . [Bretherton] avoids the ’sin’ of most political theologians and political philosophers in the Western academy who egregiously only legitimize forms of knowledge coming from their narrow enclaves and marginalize others to the benefit of Western hegemony or (unconscious) white supremacy. . . . His brilliant scholarship, on display in this book, his deliberate choice of interlocutors, and his astute selection of spheres of social life for analysis are a demonstration of what the common life in Christ looks like in theologizing. . . . Bretherton opens things up to multiple voices not as a politically correct ploy, but as a genuine and rigorous engagement with others."
— Nimi Wariboko
Boston University

"Christ and the Common Life offers one of the most comprehensive and insightful examinations of the intersecting terrains of North Atlantic political theology while building a careful, rich, and compelling theological defense of democracy. Deftly weaving together seemingly disparate intellectual strands and issues, this is Bretherton at his finest with a wide-ranging engagement of political and social theory, dialogical explication of theological traditions, and a grounded methodology that navigates the real complexities of political and ecclesial co-constitution and the necessity of democratic practices. Whether or not one fully agrees with his assessments and proposals, Christ and the Common Life compels nuanced engagement and sets a new standard for political theology."
— C. Melissa Snarr
Vanderbilt University Divinity School

"Deeply learned and humane, Bretherton’s book surveys the landscape of political theology while making its own argument for ’why Christians should be committed to democracy as a vital means for pursuing a flourishing life.’ Bretherton's five case studies—on humanitarianism, Black Power, Pentecostalism, Catholic social teaching, and Anglicanism—are nothing short of a master class in different Christian conceptions of political flourishing."
— Cathleen Kaveny
Boston College

"Bretherton’s work is always rich, brimming with ideas and thought-provoking arguments. But this is a new kind of gift—an introduction to the whole field of political theology, taking seriously both the political and the theological aspects of the field. Furthermore, this field is often only seen in fragments; but in this book, the synoptic nature of this book makes for a gift on an altogether new level. Ambitious, lucid, making surprising and fruitful connections, the book takes readers on a journey through a bewildering maze of topics—and you never feel lost. I don’t know of another book that can compete with it. Highly recommended, to those seasoned in the field and to those just starting out."
— Charles Mathewes
University of Virginia

"Luke Bretherton’s highly original and challenging book cuts across the dominant polarities characterizing political theology—religious/secular, church/state, and private/public—in order to challenge Christianity to embrace the political dimensions of its very public faith without reducing theology to pragmatic political considerations. The book’s unconventional yet innovative approach rests in its ability to engage a multiplicity of theological and political traditions without limiting itself to any one theoretical framework, thereby allowing certain pressing existential questions to guide the conversation and in the process remind the reader that God-talk and political talk are, and have always been, mutually intertwined. In other words, Bretherton’s conception of political theology brings together the prophetic and corporate dimensions of the Christian faith for the sake of a shared common good in our increasingly pluralist context."
— Rub&eacute;n Rosario Rodr&iacute;guez
Saint Louis University

"Bretherton has given the academy and the church a resource that introduces political theology in a manner that will benefit classroom use while providing a substantive proposal in its own right. . . . [This] work deserves to be celebrated and widely read."
— Stone-Campbell Journal

"[Bretherton] structures his book to allow each chapter to be read by itself or the book as a whole. This means of organization allows it to be used beneficially for class settings whether in the church or an academic setting."
— Catholic Library World

"Beyond an introductory text . . . Christ and the Common Life is also a work of constructive (ecumenical) Christian political theology. Specifically, it makes a case for ’democratic politics’ as a ’work of love’ to which Christians are called by our faith. Bretherton’s account of ’democratic politics’—as distinct from the governmental structures and electoral procedures often conflated with ’democracy’—counts among his most valuable and original contributions."
— Journal of Moral Theology

"In reading Bretherton’s work, one is immediately struck by both the breadth of his research and the clarity of his ideas. . . . Bretherton’s work helps us understand Christ’s command that we build a common life where all flourish. He goes further by showing how Christians need to engage in politics in a way that builds bridges, breaks down barriers, and truly values the other as God’s creation—antidotes to the polarization and intolerance so prevalent in our world. Through his work, Bretherton has outlined a new political agenda for Christians that is desperately needed in our troubled and divided world."
— Dialog: A Journal of Theology

"Bretherton has made an interesting and provocative effort to encourage us, in a sense, to embrace our democratic messiness, ordering our lives together in a way that, hopefully, reflects the best of ourselves and—as much as we can this side of heaven—Christ’s revelation."
— Christianity Today

"Christians of all traditions, liberal and evangelical alike, will find much to enrich their understanding of the vital interface between faith and politics and much to stimulate vision and action."
— Methodist Recorder

▼▲
I'm the author/artist and I want to review Christ and the Common Life: Political Theology and the Case for Democracy.
Back
Back