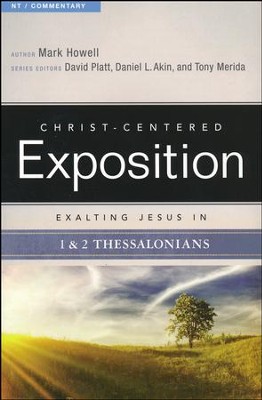 ▼▲
Exalting Jesus in 1 & 2 Thessalonians is one volume in Christ-Centered Exposition Commentary series. This series affirms that the Bible is a Christ-centered book, containing a unified story of redemptive history of which Jesus is the hero. It's presented as sermons, divided into chapters that conclude with a "Reflect & Discuss" section, making this series ideal for small group study, personal devotion, and even sermon preparation. It's not academic but rather presents an easy-reading, practical and friendly commentary. The series is projected to be 48 volumes.

▼▲
Dr. Mark A. Howell has served as Senior Pastor at First Baptist, Daytona Beach, Florida since September 2011. He holds a Bachelor of Arts degree from Carson-Newman College in Jefferson City, TN. While at Carson-Newman he was privileged to play linebacker on the 1986 National Championship football team. He also holds both the Master of Divinity and Doctor of Philosophy degrees from the Southeastern Baptist Theological Seminary in Wake Forest, North Carolina.

Dr. Howell has been in the ministry for more than twenty years and has served churches in Texas, North Carolina, Kentucky and Arkansas. Additionally, he served on the faculty of the Southern Baptist Theological Seminary in Louisville, Kentucky as Professor of Preaching and Pastoral Ministries. He also has served as an Adjunct Professor for Southwestern Baptist Seminary. He has a passion for taking the gospel to the nations and has been privileged to preach the gospel around the world. Dr. Howell has also led mission teams to Ecuador, Honduras, Mexico, Kenya, South Africa, India, Nepal, Argentina, Russia, Ukraine, China, Indonesia, the Philippines and Singapore. He has served on the Executive Committees of both the Southern Baptist Convention and the Southern Baptists of Texas Convention. He is married to Carmen, who holds a Bachelor of Arts Degree in biblical counseling from the Criswell College in Dallas, Texas.

▼▲
It's one thing to know Bible stories; it's another to know the story of the Bible. It's one thing to be aware of the story's many heroes; it's another to have met the Hero himself. From the Old Testament that anticipates him, to the Gospels that manifest him, to the Book of Acts that proclaims him, to the Epistles that explain him, and to the Book of Revelation that tells of him coming again, your Bible is about Jesus. That's why I love the vision of the Christ-Centered Exposition Commentary series. It models for preachers and teachers how to proclaim - with pastoral focus and exegetical care - the beauty of the gospel from every page of Scripture.
-Matt Smethurst
Associate Editor for The Gospel Coalition

Few things are more important for faithful biblical interpretation than reading Scripture in light of its master narrative. The Christ-Centered Exposition series aims to do just that. In a postmodern age, these commentaries provide pastors and lay people an invaluable resource that is unswervingly committed to the authority of Scripture and the centrality of the Gospel in the Bible's storyline.
-Dr. R. Albert Mohler Jr., President
The Southern Baptist Theological Seminary

▼▲
I'm the author/artist and I want to review Christ-Centered Exposition Commentary: Exalting Jesus in 1 & 2 Thessalonians.
Back
Back