Christ Among Other gods: A Defense of Christ in an Age of Tolerance
By: Erwin W. Lutzer 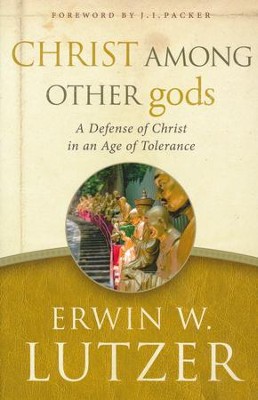 Christ Among Other gods: A Defense of Christ in an Age of Tolerance

▼▲
You've heard it said, "All religions are equal." But do you know how to respond?

Tolerance imagines all religions as spokes of one wheel, spinning everyone together in harmony with God. Christ Among Other gods shows how this wheel simply doesn't hold up.

Walking you through a study of Christ - from his birth to his promised second coming - pastor and scholar Erwin W. Lutzer presents Jesus as He is: the only way of salvation. Learn how to:The tensions between tolerance and truth are growing, as are the challenges of representing Christ in today's world. Christ Among Other gods will help you understand and navigate these challenges. It gives you the facts you need to counter the claims of false religions with the truth of Christ. And what is more, it will help you fall more in love with Jesus, the only way, truth, and life.

▼▲
DR. ERWIN LUTZER has served as senior pastor of The Moody Church in Chicago for over 30 years. A renowned theologian, Dr. Lutzer earned his BTh from Winnipeg Bible College, a ThM from Dallas Theological Seminary, a MA in philosophy from Loyola University, and an honorary LL.D. from the Simon Greenleaf School of Law. He is an award-winning author and the featured speaker on three radio programs that can be heard on more than 700 radio stations in the United States and around the world. Dr. Lutzer and his wife, Rebecca, live in the Chicago area and have three grown children and eight grandchildren.

"Christ Among Other gods: A Defense of Christ in an Age of Tolerance is a true must-read in my opinion. Lutzer argues throughout the book that Christianity is unique and that truth should never be compromised for the sake of tolerance.

Legal tolerance, for example, would be 'the right for everyone to believe in whatever faith (or none at all) he wishes.' Social tolerance he defines as being, 'a commitment to respecting all men even if we vigorously disagree with their religion ideas.' Kindness, courtesy, respect--these are the ways tolerance can be shown. Lutzer applauds both legal and social tolerance. What he disapproves of--what he argues against in this book is uncritical tolerance, which he believes goes against all logic.

For example, all ideas are to be tolerated except the idea that there are absolutes, absolute truths, that truth can be known, that some ideas are true, and, other ideas are false--at least by default. Not all ideas, not all beliefs, can equally be true, Lutzer insists. If all the doctrines in all the world religions were equally true then you'd have a big, big, contradictory mess, absent of logic and common sense. Lutzer argues for the existence of truth, for the existence of Jesus Christ as revealed in the Bible, the Jesus who claimed to be the way, the truth, the life. Not one of many ways, not one of many truths, etc.

'Officially, sin does not exist in our society, but if there were one sin left it would be a belief in objective truth, a belief that some things are still right or wrong; a belief that discrimination still has value if defined as being discriminating in what we believe, the way we behave, and what we defend.

The premise of this one is simple. Christ is not one of many gods. He cannot be shelved alongside other gods of the world. He is unique; Christianity is unique. It is a religion--a faith--based on historical fact, centered around Jesus Christ. The book studies his birth, his life (including miracles), his death, his resurrection, his ascension, his second coming. Lutzer argues that Christians should boldly stand for truth--no compromise--the world needs to know that Jesus is the way, the truth, the life. The world needs to know that heaven and hell are real, and, that each one of us will spend eternity somewhere. The Bible has authority; it speaks truth; every Christian should live their lives by God's revelation.'

Lutzer touches on other religions and other worldviews; he provides readers with a light overview of world religions and differing perspectives. It is not thorough or complete. His purpose is not to educate readers about other religions, other ideas; instead his purpose is to educate readers about Jesus. One can never assume--should never assume--that every person professing faith in Christ stands for truth and believes that the Bible is the very Word of God--true and authoritative.

'The Bible draws a definitive line through the peoples of the world, but it is not a line between races, nations, or even cultures, as such. This line separates Christ and his followers from all other religious choices. I'm committed to helping us identify that line, show where it should be drawn, and give reasons that we have no right to move it.'

The book is clear and straight forward. It is also engaging. Lutzer is NOT boring. He writes in a way that challenges readers to think, to consider, to act or react.

This book is for anyone looking for the answers to these questions:

Who is Jesus? Who was Jesus?

What do Christians believe?

Does it matter what you believe as long as you're sincere?

Is there such a thing as truth?

*Do our beliefs have consequences?"

▼▲
I'm the author/artist and I want to review Christ Among Other gods: A Defense of Christ in an Age of Tolerance.
Back
×
Back
×