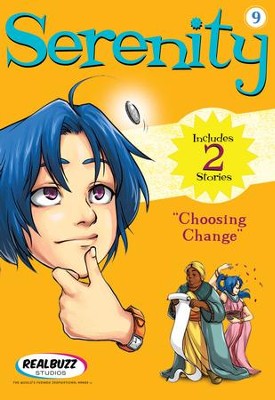 ▼▲
Her obsession with Derek is pushing Serenity to the breaking point, so she does what anyone would do - she sets up a date with another boy. Eddie is the lucky (?) guy, but he's struggling with the same issues, and not always winning the war. Can all their expectations for their night out be unrealized and yet be a success? Even though she's still confused about many things, her friends are still accommodating to her journey of faith...which just might come to an end after she tells them all about the depth of her confusion!
The movie (actually the second half of the book) is a biblical epic called 'Esther, Queen of Persia', with Serenity in the feature role. Based loosely on the first half of the Old Testament story of Esther, recently deposed Queen Vashti (played by Kimberly) tries to end the reign of newly chosen Queen Esther. Can Esther stay true to her Jewish roots while living in the courts of a pagan king? Recommended for ages 14 and up.

Note: Some of the content may be viewed by some as inappropriate for younger readers.

A Night at the Drive-in Leaves Serenity Reeling

Serenity decides the best way to make Derek jealous is by dating other guys. But the date she arranges forces her to decide what she really wants in a relationship. Who knew trying to do the right thing could be so confusing?

Then, Serenity and her pals film another mini-movie--this one a Biblical epic, "Esther, Queen of Persia." Whisked away to take part in a royal beauty contest, lovely young Esther realizes there may be a purpose and plan to life beyond what she can imagine.

▼▲
I'm the author/artist and I want to review Choosing Change - eBook.
Back
×
Back
×