Skip to main content
NEW CYBER DEALS Save up to 90% thru 12/12  shop now >
Children of Armenia: A Forgotten Genocide and the Century-long Struggle for Justice - eBook
By: Michael Bobelian
Stock No: WW8753EB 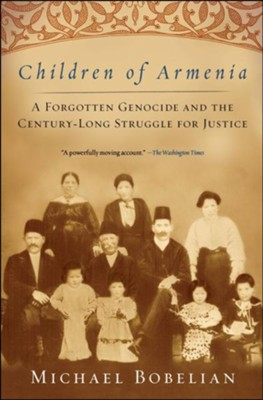 Children of Armenia: A Forgotten Genocide and the Century-long Struggle for Justice - eBook

▼▲
The first book to chronicle the aftermath of the twentieth century’s first genocide, this groundbreaking work recounts the Armenians’ struggle for justice in the face of fifty years of silence and denial.

• First comprehensive account: From 1915 to 1923, the Ottoman Turks drove two million Armenians from their ancestral homeland, slaughtering 1.5 million of them in the process. After an immediate groundswell of support for the “starving Armenians” led by President Woodrow Wilson, the atrocities were wiped from public consciousness. Why has Turkey never been held accountable? This, the first account of the post-Genocide era, explains how and why the event disappeared from the world’s memory and reveals for the first time the full story of the events that conspired to conceal the truth.

• Timely: From rwanda to Darfur to Bosnia, there has been much discussion of twentieth-century genocides, the proper u.S. response, and the tragic aftermaths. Bobelian’s pioneering account of the post-Genocide generation’s struggle for justice demonstrates just how critical the establishment of truth is for peaceful reconciliation.

▼▲
The 1915 genocide perpetrated by the Turkish government against its Armenian subjects drags on in the form of Turkish denial and global indifference, according to this rancorous history. Journalist Bobelian gives a sketchy rundown of the massacres (what difference did it make if several hundred thousand Armenians died rather than 1.5 million?), but his main story is the ensuing refusal of Turkey and the international communityespecially the United Statesto properly acknowledge the crime. He chronicles a generations-long contest between moral claims and realpolitik; after initial Western outrage, the genocide was shoved off the agenda of Turkish-American relations by commercial interests and the anti-Soviet alliance. The book provides an exhaustive account of the perennial battles between Armenian-American activists and Turkey's lobbyists over congressional genocide resolutions. The victimization of the Armenians' excuses much for Bobelian, who blames Armenian terrorism in the 1970s and 1980she sympathetically profiles an aging survivor who assassinated two Turkish diplomatson frustration and rage over Ankara's denials. One leaves this j'accuse wondering if the quest for justice can be taken to an unhealthy extreme. (Sept. 1) Copyright 2009 Reed Business Information.

▼▲
I'm the author/artist and I want to review Children of Armenia: A Forgotten Genocide and the Century-long Struggle for Justice - eBook.
Back
Back