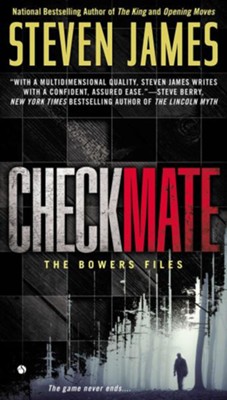 ▼▲
When a clandestine FBI facility is attacked, Special Agent Patrick Bowers is drawn into the vicious, ruthless story that a killer from his past is bent on telling the world.

Clues lead to long-forgotten secrets buried deep beneath Uptown Charlotte, North Carolina. Now Bowers is caught up in trying to stop one of the deadliest attacks ever planned on American soil.

Smart, tense, and full of mind-bending twists and turns, Checkmate explodes onto the scene, bringing this cycle of the Bowers Files to an unforgettable conclusion.

▼▲
Steven James is the national bestselling author of nine novels that have received wide critical acclaim from Publishers Weekly, New York Journal of Books, RT Book Reviews, Booklist, Library Journal and many others. He has won three Christy Awards for best suspense and was a finalist for an International Thriller Award for best original paperback. His psychological thriller The Bishop was named Suspense Magazine’s book of the year. Publishers Weekly calls him "[A] master storyteller at the peak of his game."

Steven is an active member of International Thriller Writers, the Authors Guild, Mystery Writers of America, and International Association of Crime Writers. He is also a contributing editor for Writer's Digest. He has a master's degree in storytelling and has taught writing and creative communication around the world. When he's not writing or speaking, you'll find him trail running, rock climbing, or drinking a dark roast coffee near his home in eastern Tennessee.

"Checkmate is high tension all the way. The author writes with precision and incisiveness. Fast, sharp, and believable. Put it at the top of your list."-John Lutz, Edgar-award winning author of Frenzy

"A perfectly crafted hard-hitting, intense thriller that takes readers to the top of the cliff and dangles them over the edge. James is an author that every thriller reader should have on their bookshelf."-Suspense Magazine

▼▲
I'm the author/artist and I want to review Checkmate, Patrick Bowers Series #7.
Back
×
Back
×