BRING CHRISTMAS HOME SALE: Save up to 85% through 11/2 >
Chasing George Washington
By: The Kennedy Center Presents, Ronald Kidd
Illustrated By: Ard Hoyt 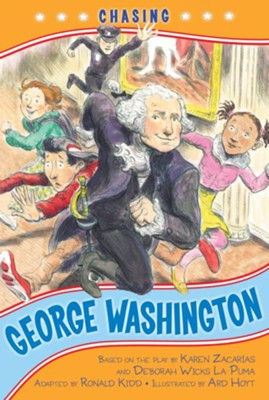 ▼▲
What would it be like if you lived in the White House? Dee Dee, Jose, and Annie are about to find out! When their class takes a field trip to 1600 Pennsylvania Avenue, the three accidentally knock George Washington out of his portrait and into real life, which turns their everyday tour into an unexpected adventure! As they try to get the nation's first President back into his painting, the kids come across other famous White House residents, including Abraham and Mary Todd Lincoln, Dolley Madison, and Jackie Kennedy. Through their madcap journey, they realize that the White House isn't just a tourist attraction--it's also a home.

▼▲
Ronald Kidd is the author of the highly acclaimed Monkey Town: The Summer of the Scopes Trial, as well as On Beale Street. His novels of adventure, comedy, and mystery have received the Children's Choice Award, an Edgar Award nomination, and honors from the American Library Association, the Library of Congress, and the New York Public Library. He is a two-time O'Neill playwright who lives in Nashville, Tennessee.

Ard Hoyt has illustrated a number of books, including the New York Times bestsellers I’m a Manatee by John Lithgow and The Hair of Zoe Fleefenbacher Goes to School by Laurie Halse Anderson. Ard lives with his wife and five daughters in Bentonville, Arkansas.

▼▲
I'm the author/artist and I want to review Chasing George Washington.
Back
×