Chasing Fireflies: A Novel of Discovery - eBook
By: Charles Martin 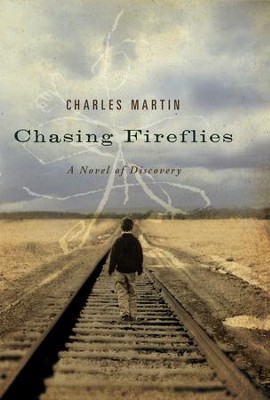 ▼▲
When paramedics find a malnourished 6-year-old boy near a burning car that holds a dead woman, they wonder who he is---and why he won't talk! Chase, a small-town journalist, is assigned to cover the story and investigate the boy's identity. But will his search unearth long-buried emotions about his own history?

From the New York Times bestselling author of The Mountain Between Us comes a powerful story about fishing, baseball, home cooking, and other matters of life and death . . .

"Martin understands the power of story and he uses it to alter the souls and lives of both his characters and his readers . . ." —Patti Callahan Henry, New York Times bestselling author

They have one summer to find what was lost long ago.

"Never settle for less than the truth," she told him.

On a stifling summer day, an old Chevy Impala ignored the warning signals and was annihilated by the oncoming train. What no one realized until much later was that the driver had paused just before entering the tracks and kicked a small boy out of the car. A small boy with broken glasses who is clutching a notebook with all his might . . . but who never speaks.

Chase Walker was one of the lucky ones. He was in foster care as a child, but he finally ended up with a family who loved him and cared for him. Now, as a journalist for the local paper, he’s moved on and put the past behind him.

But when he’s assigned the story of this young boy, painful, haunting questions about his own childhood begin to rise to the surface.

And as Chase Walker discovers, learning the truth about who you are can be as elusive—and as magical—as chasing fireflies on a summer night.

"If I could use only one word to describe Chasing Fireflies it would have to be ’WOW!’ From the very beginning of the book I was drawn into the story and could not put it down." —epinions.com

Charles Martin is a New York Times and USA Today bestselling author of thirteen novels. He and his wife, Christy, live in Jacksonville, Florida.

▼▲
In his fifth novel, Martin (Maggie; When Crickets Cry) offers the same brand of sentimental Southern storytelling that has endeared him to readers. Just before T-boning her Impala into a train, a woman on a suicide run kicks her horrifically abused little boy, known only as Snoot--or to the state, John Doe 117--out of the car. Chase Walker, a reporter for the Brunswick Daily in Glen County, Ga., is assigned to follow up on the boy, whose abandonment mirrors Chase's own haunted past. The little boy, apparently mute, is an artistic prodigy who excels at chess and quickly works his way into Chase's heart. Martin's strength is in his memorable characters, especially Uncle Willie, whose fresh quips ("as out of place in South Georgia as a long-tailed cat in a room full of rocking chairs"), penchant for Krispy Kreme doughnuts and mysterious past keep readers engrossed. Here, as in some of his other novels, Martin can't resist piling on unnecessary tragedies; his characters and their issues are enough to keep the pages turning. Although the plot needs fine-tuning, Martin's prose is lovely, and the flashback parallel stories of a grown man abandoned as a child and the neglected boy will ensure readers keep the Kleenex handy. Copyright 2007 Reed Business Information.

▼▲
I'm the author/artist and I want to review Chasing Fireflies: A Novel of Discovery - eBook.
Back
×
Back
×