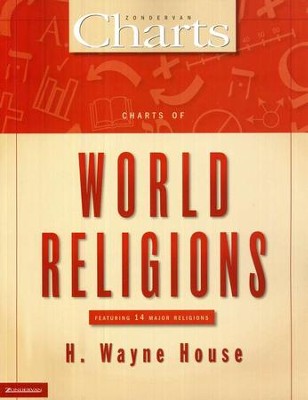 ▼▲
Another in the helpful series of charts from Zondervan, this one covering world religions (14 major ones, with their major iterations, and many smaller belief systems), the beliefs of most of humanity are covered within these pages. More widely held or influential religions are given ample room to breathe, and can easily be compared and contrasted to other religions. Delineating major divisions within religions as well as separating points between them, House draws parallels where appropriate but clearly sets the series of charts into Christian perspective. Covering not only modern popular religions but also including ancient Mediterranean beliefs as well as those of modern indigenous peoples, many of the charts are in the form of essays addressing certain aspects of each faith. Also, many illustrative charts show the timelines and historical flow of religious thought over the millennia, giving extensive overviews as well as resources for further study of every topic.

▼▲
Charts of World Religions provides an invaluable resource for students and anyone interested in understanding today’s complex religious mosaic. It allows quick comparison and contrast of numerous religions. In clear, easy-to-understand charts, this book provides vital information on such topics as the origins of different religions, the nature of deity or ultimate spiritual reality, the source of spiritual truth, the nature of the human predicament, and the nature of salvation/enlightenment/liberation. Similarities and differences between various beliefs are brought out, and subdivisions of broad categories, such as various branches of Christianity and Islam, are detailed.More than ninety charts appear in six major sections:• Prolegomena to World Religions • Comparison of World Religions • Ancient Mediterranean Religions o Egyptian pantheon, Graeco-Roman deities, and more• Western Religions o Judaism, Christianity, Islam, Baha’i, and Secular Humanism• Eastern Religions o Hinduism, Buddhism, Taoism, Jainism, Zoroastrianism, Shintoism, Confucianism, and Sikhism• Indigenous Religions o African, Caribbean, and Native American“Wayne House’s Charts of World Religions is an excellent resource for both the overall picture and the painstaking details of religious belief around the world.”—Win Corduan, professor of philosophy and religion, Taylor University

H. Wayne House (ThD, JD) is distinguished research professor of theology, law, and culture at Faith Evangelical Seminary, Tacoma, Washington. He is the author of numerous books, including Charts of Cults, Sects, and Religious Movements; and Charts of Christian Theology and Doctrine; and Charts of Apologetics and Christian Evidences. Dr. House is past president of the Evangelical Theological Society. He and his wife Irina reside in Silverton, Oregon.

▼▲
I'm the author/artist and I want to review Charts of World Religions.
Back
×
Back
×