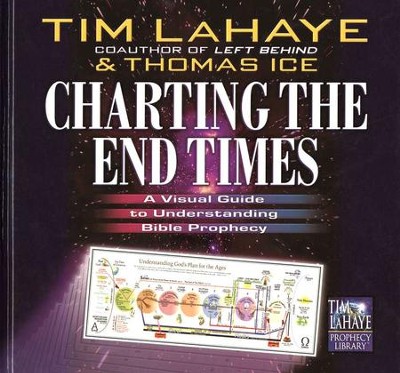 ▼▲
Does apocalyptic literature leave you bleary-eyed? Gain a clear picture of Bible prophecy with this astonishing visual guide! Features stimulating text; over 50 dynamic color charts; timelines to clarify end-times chronology; and a 3-page foldout panoramic view of God's plan for the ages. The result of decades of research and study by two prophecy experts. 124 pages, hardcover from Harvest.

Bestselling author Tim LaHaye and prophecy expert Thomas Ice teamed up to produce a visual resource unmatched by anything available in the Christian book marketplace! The result of decades of careful research and Bible study, the charts and well-written explanatory text provide a fascinating picture of the times ahead. Charting the End Times includes...

Providing a wealth of information, this book is certain to become a popular study tool for understanding God's unfolding plan!

Tim LaHaye—a renowned prophecy scholar, minister, and educator—conceived the Left Behind series and authored and coauthored more than 80 books, including Charting the End Times and Exploring Bible Prophecy from Genesis to Revelation. He received a DMin from Western Seminary and a LittD from Liberty University.

▼▲
In the 1830s and early 1840s, Baptist preacher William Miller gained thousands of followers when he announced that the world would come to an end in 1843. He was adept at parlaying his message through books and copious pamphlets, and plied his audiences with detailed prophecy charts, mathematical tables and timelines. A century and a half later, Left Behind pedagogue Tim LaHaye (writing with Thomas Ice) seems to take a leaf from Miller's book in issuing Charting the End Times: A Visual Guide to Understanding Bible Prophecy. It has charts, illustrations and maps!.Its glossy, full-color format is light-years beyond Miller's, but the prophecy content is much the same. (Unlike Miller, LaHaye rather wisely does not set a projected date for Christ's return.) (Harvest House, $24.99 144p ISBN 0-7369-0138-8; Nov.) Copyright 2001 Cahners Business Information.

▼▲
I'm the author/artist and I want to review Charting the End Times: A Visual Guide to Understanding Bible Prophecy.
Back
×
Back
×