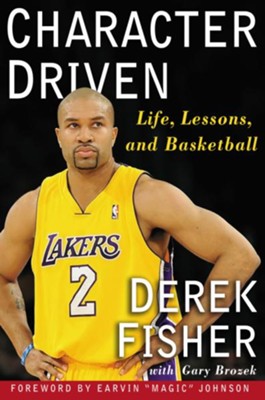 ▼▲
The Three Time NBA Champion and starting point guard for the Los Angeles Lakers shares his Christian faith and inspirational values for success and happiness.

Since his inaugural season with the NBA in 1996, Derek Fisher has had a dramatic impact on the great success of the Lakers. Playing alongside legendary players like Kobe Bryant, Shaquille O’Neal, and Lamar Odom, Fisher has held his position at point guard, participating in some of the most dramatic post-season games and moments in recent memory.

In 2007 Derek Fisher and his wife Candace’s lives were upturned by news that their eleven-month-old daughter, Tatum, had been diagnosed with a degenerative and rare form of eye cancer called retinoblastoma. Although his team, the Utah Jazz, was in the midst of a heated playoff series, Fisher immediately put his family first to be with his daughter at the time of her required emergency surgery and chemotherapy. Nominated the best moment in the 2007 ESPY Awards, Derek was able to make a dramatic late entrance and performance in the fourth quarter of game 2 to help the Jazz to an emotional victory. Following the season, Fisher asked the Jazz to release him of his contract so he could devote his energies to fighting his daughter’s retinoblastoma without knowing if he would ever play basketball again. Fisher officially rejoined the Lakers, resuming his role as point guard, and provided a veteran influence alongside Kobe Bryant to a relatively young Lakers squad. In his compelling new book, Fisher shares the Christian values that have guided him on the court and off. With anecdotes from his personal and professional life, Fisher offers lessons learned along the way. Drawing on the power of faith, he shows how anyone can play for a successful team: whether that team is family, community, or just happens to be one in the NBA.

▼▲
Derek Fisher has spent thirteen seasons in the NBA playing for the Los Angeles Lakers, Golden State Warriors, and Utah Jazz. He was the former president of the NBA Players Association. And currently point guard for the LA Lakers, he lives with his family in Los Angeles.

▼▲
"From humble beginnings in Little Rock to multiple NBA championships, Derek Fisher's career has seen highs and lows. Through it all, he's demonstrated strong faith in the face of adversity, commitment to team goals over individual recognition, and above all else, devotion to his family. His story shows that what truly matters aren't the achievements or accolades, but the values that carry you through them. It's a message we can all take to heart." -- President Bill Clinton
"Don't be blinded by the four NBA championship rings. Derek Fisher's thirteen-year journey through professional basketball is as much about what shaped him as a man and the choices he's made in his life as it is about game-winning shots and sharing a backcourt with Kobe Bryant." -- Michael Wilbon
"This is the heart of Derek Fisher. I'm glad that he's decided to share more of his life and the lessons that he's learned along the way. I hope you enjoy getting to know him as much as I have. The league, and the world at large, could use more people like Derek Fisher in it." -- From the Foreword by Earvin "Magic" Johnson

▼▲
I'm the author/artist and I want to review Character Driven: Life, Lessons, and Basketball - eBook.
Back
Back