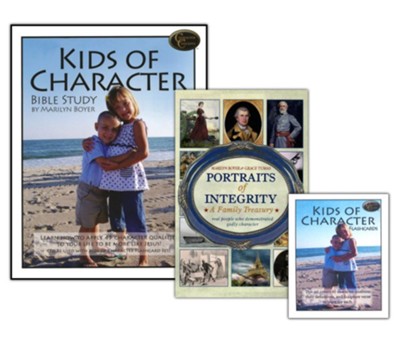 ▼▲
The Kids of Character Curriculum from Character Concepts is a multi-age course that walks children through definitions, examples, and application exercises related to 45 different character qualities. Students will learn to use the Bible to make judgment calls and study the qualities of loyalty, boldness, honor, love, diligence, endurance, wisdom, alertness, decisiveness, discernment, resourcefulness, initiative, and other traits. Each worksheet has the character quality at the top of the page, followed by a definition, memory verse, some comprehension questions, and two "if" application questions that help children learn to make right choices before being placed in similar situations.

The Kids of Character Flashcards are designed to be used alongside the Character Qualities for Kids book and feature the 45 character qualities for your child to learn. A "kid-friendly" definition is on one side and a Scripture verse is provided on the other side. Made from light cardstock. Approximately 4.25" x 5.5"

Portraits of Integrity will inspire your children with the stories of great men and women who came before them. Kids will be challenged to strive for excellence through the examples of 45 people who served God at all costs.

▼▲
I'm the author/artist and I want to review Character Concepts Curriculum: Kids of Character, Level 3 (Ages 7-10).
Back