Skip to main content
BIG SUMMER BLOWOUT: Over 2,000 deals ~ up to 85% off, through 8/16. Shop now >
The Year that Changed the World: The Untold Story Behind the Fall of the Berlin Wall - eBook
By: Michael Meyer
Stock No: WW8872EB 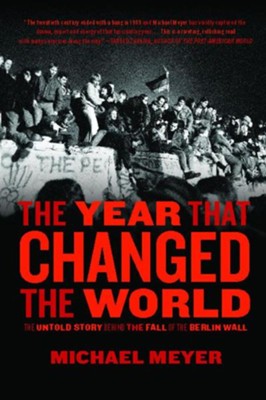 The Year that Changed the World: The Untold Story Behind the Fall of the Berlin Wall - eBook

▼▲
ON THE TWENTIETH ANNIVERSARY OF THE FALL OF THE BERLIN WALL, MICHAEL MEYER PROVIDES A RIVETING EYEWITNESS ACCOUNT OF THE COLLAPSE OF COMMUNISM IN EASTERN EUROPE THAT BRILLIANTLY REWRITES OUR CONVENTIONAL UNDERSTANDING OF HOW THE COLD WAR CAME TO AN END AND HOLDS IMPORTANT LESSONS FOR AMERICA'S CURRENT GEOPOLITICAL CHALLENGES.

" Mr. Gorbachev, tear down this wall!" President Ronald Reagan's famous exhortation when visiting Berlin in 1987 has long been widely cited as the clarion call that brought the Cold War to an end. The United States won, so this version of history goes, because Ronald Reagan stood firm against the USSR; American resoluteness brought the evil empire to its knees.

Michael Meyer, who was there at the time as a Newsweek bureau chief, begs to differ.

In this extraordinarily compelling account of the revolutions that roiled Eastern Europe in 1989, he shows that American intransigence was only one of many factors that provoked world-shaking change. Meyer draws together breathtakingly vivid, on-the-ground accounts of the rise of the Solidarity movement in Poland, the stealth opening of the Hungarian border, the Velvet Revolution in Prague and the collapse of the infamous wall in Berlin. But the most important events, Meyer contends, occurred secretly, in the heroic stands taken by individuals in the thick of the struggle, leaders such as poet and playwright Vaclav Havel in Prague; the Baltic shipwright Lech Walesa; the quietly determined reform prime minister in Budapest, Miklos Nemeth; and the man who privately realized that his empire was already lost, and decided -- with courage and intelligence -- to let it go in peace,Soviet general secretary of the communist party, Mikhail Gorbachev.

Reporting for Newsweek from the frontlines in Eastern Europe, Meyer spoke to these players and countless others. Alongside their deliberate interventions were also the happenstance and human error of history that are always present when events accelerate to breakneck speed. Meyer captures these heady days in all of their rich drama and unpredictability. In doing so he provides not just a thrilling chronicle of the most important year of the twentieth century but also a crucial refutation of American political mythology and a triumphal misunderstanding of history that seduced the United States into many of the intractable conflicts it faces today. The Year That Changed the World will change not only how we see the past, but also our understanding of America's future.

▼▲
Michael Meyer is currently  Director of Communications for the United Nations Secretary-General Ban Ki-moon. Between 1988 and 1992, he was Newsweek's Bureau Chief for , Central Europe and the Balkans, writing more than twenty cover stories on the break-up of communist and German unification. He is the winner of two Overseas Press Club Awards and appears regularly as a commentator for MSNBC, CNN, Fox News, C-Span, NPR and other broadcast network. He previously worked at the Washington Post and Congressional Quarterly. He is the author of the Alexander Complex (Times Books, 1989), an examination of the psychology of American empire builders.  He lives in New York City.

▼▲
I'm the author/artist and I want to review The Year that Changed the World: The Untold Story Behind the Fall of the Berlin Wall - eBook.
Back
Back