Skip to main content
CYBER WEEK SALE: Up to 88% off, thru 12/6. >
Changed into His Likeness: A Biblical Theology of Personal Transformation
Edited By: D.A. Carson
By: J. Gary Millar
Stock No: WW871162 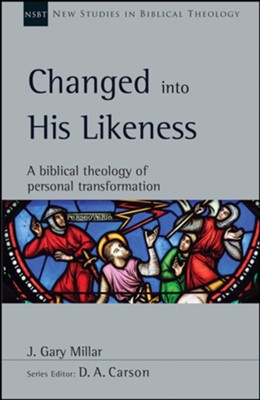 Changed into His Likeness: A Biblical Theology of Personal Transformation

When it comes to the Christian life, what exactly can we expect with regard to personal transformation? Gary Millar addresses this most basic question in this NSBT volume. After surveying some contemporary psychological approaches to the issue of change and discussions of biblical anthropology, he explores the nature of gospel-shaped change, exposing the dangers of both promising too much and expecting too little. The central part of his study focuses on "life in the middle"—between the change that is brought about when we become Christians and the final change in which we will be raised with Christ. Millar presents a case for reading the "character studies" of major Old Testament figures from Noah to Solomon as depicting a declension throughout their lives and their innate sinfulness and lack of change. This problem is resolved in the establishment of a new covenant, which promises both individual and corporate transformation in the power of the Spirit. This transformation is presented in the New Testament as a rich and complex process, which cannot be contained or adequately described by one set of images. Transformation is real, deep-rooted and far-reaching. In developing an integrated biblical theology of transformation, Millar draws on the contributions of key thinkers, including Augustine, Aquinas, Calvin, Edwards, Owen, Newton, James K. A. Smith and the Biblical Counselling movement. He concludes with a careful synthesis, charting a middle way between the errors of over-realized and under-realized eschatology. Addressing key issues in biblical theology, the works comprising New Studies in Biblical Theology are creative attempts to help Christians better understand their Bibles. The NSBT series is edited by D. A. Carson, aiming to simultaneously instruct and to edify, to interact with current scholarship and to point the way ahead.

J. Gary Millar is principal of Queensland Theological College, Australia. Previously he served as a minister in Northern Ireland and the Republic of Ireland. His books include Now Choose Life, Calling on the Name of the Lord, and commentaries on Deuteronomy, Kings, and 2 Corinthians.

▼▲
I'm the author/artist and I want to review Changed into His Likeness: A Biblical Theology of Personal Transformation.
Back