BIG SUMMER BLOWOUT: 3 Days Only! Save up to 90% thru Wednesday. Shop now >
Last Chance Detectives #3: Escape From Fire Lake 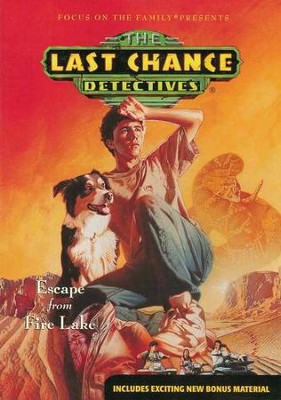 ▼▲
When Mike fails to show up by day's end, our young sleuths have their biggest and most important case yet. A cliffhanger to end all cliffhangers, Escape From Fire Lake teaches kids the importance of perseverance.

▼▲
Four young private eyes are about to become your juvenile reader’s newest heroes! In this blockbuster series from Tyndale and Focus on the Family, Mike, Ben, Wynnona, and Spencer unravel mysteries from their headquarters in a restored B-17 bomber. Their fast-paced adventures lead to more than just clues, however. In Escape from Fire Lake, the Last Chance Detectives race against time during a desperate search for their friend in this thrilling story of personal faith in God and the difference it makes in times of crisis. Left by two thieves to die in the desert, Mike braves the scorching heat in a desperate attempt to survive. The kids learn that no matter how bad things get, God will never leave you or forsake you.

▼▲
I'm the author/artist and I want to review Last Chance Detectives #3: Escape From Fire Lake.
Back
×
Back
×