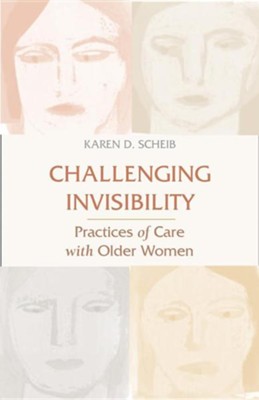 ▼▲
Women older than 65 are a large subgroup of the average congregation, yet women are noticeably absent in the literature and training in pastoral care and counseling. They outnumber same-aged men in the general United States population by more than 40 percent but are underrepresented in genealogical studies and disappear from the media, which depicts few positive images of older women in television, movies, and advertisements. In an in-depth study of women over the age of 65, Karen Scheib asked women how they feel they are perceived in their churches. Their answer: "invisible." Karen Scheib believes that invisibility results from social, political, and economic factors that provide the context in which women age. This social context is not neutral toward aging, but defines or constructs what it means to grow old and to be old. Understanding the construction of older women's invisibility in both church and society requires a perspective that moves beyond the individual experiences of aging to an analysis of the social forces that shape the experience of aging in America.

▼▲
I'm the author/artist and I want to review Challenging Invisibility: Practices of Care with Older Women.
Back
×