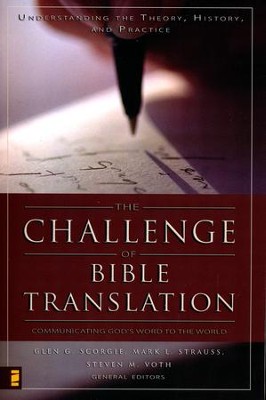 The Challenge of Bible Translation: Communicating God's Word to the World

▼▲
An In-Depth Look at Bible Translation

With a reach that covers the entire globe, the Bible is the best-selling, most earnestly studied book of all time. It has been translated into well over 1,000 languages, from those of global reach such as English, French, and Arabic, to a myriad of isolated tribal tongues. Yet while most readers of the English Bible have a favorite version, few understand how the different translations came about, or why there are so many, or what determines whether a particular translation is trustworthy.

Written in tribute to one of today's true translation luminaries, Dr. Ronald Youngblood, The Challenge of Bible Translation will open your eyes to the principles, the methods, the processes, and the intricacies of translating the Bible into language that communicates clearly, accurately, and powerfully to readers of many countries and cultures. This remarkable volume marshals the contributions of foremost translators and linguists. Never before has a single book shed so much light on Bible translation in so accessible a fashion.

In three parts, this compendium gives scholars, students, and interested Bible readers an unprecedented grasp of:

The Challenge of Bible Translation will give you a new respect for the diligence, knowledge, and care required to produce a good translation. It will awaken you to the enormous cost some have paid to bring the Bible to the world. And it will deepen your understanding of and appreciation for the priceless gift of God's written Word.

▼▲
Glen G. Scorgie (Ph.D., St. Andrews) is professor of theology at Bethel Seminary San Diego since 1996. Previously he was academic vice-president of North American Baptist College in Edmonton, Alberta, Canada, and is a past president of the Canadian Evangelical Theological Association. For the past decade he has also been involved in the ministries of Chinese Bible Church of San Diego, and lectures regularly in Asia. His writings include A Little Guide to Christian Spirituality (2007). For more information, visit his website at www.glenscorgie.com.

▼▲
I'm the author/artist and I want to review The Challenge of Bible Translation: Communicating God's Word to the World.
Back
×
Back
×