Skip to main content
Get Christmas Ready Sale: Deals on over 1,150 titles thru 9/27.
Centered: Trading Your Plans for a Life That Matters
By: Jason Brown, Paul Asay
Stock No: WW193352 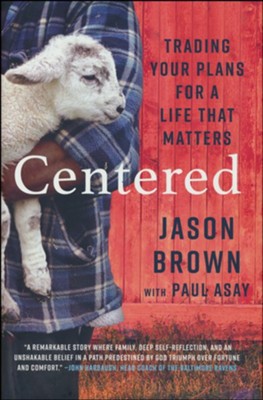 Centered: Trading Your Plans for a Life That Matters

In Centered, former NFL player Jason Brown shares the story of his and his family's call to leave a life in the spotlight and pursue a life in agriculture. Through the ups and downs of financial challenges, learning to embrace a new career, and caring for his family, the Brown's story will inspire readers to listen for and follow leadings into God's wild and abundant dreams.

▼▲
This riveting story of a top-earning NFL center and his family who walked away from it all to follow God's call to alleviate hunger as farmers—a life they knew absolutely nothing about—illustrates the sacrifice and ultimate reward of obedience to our heavenly Father even when it doesn't make earthly sense.

"A remarkable story where family, deep self-reflection, and an unshakable belief in a path predestined by God triumph over fortune and comfort."—John Harbaugh, head coach of the Baltimore Ravens

NFL lineman Jason Brown had everything in the world. He was the highest-paid center in the game. He lived in luxury. Millions of people saw and admired him every week. Then in 2012, Jason heard a call from God that changed everything.

Leaving behind an incredibly successful football career that paid millions, Jason turned toward a life he knew nothing about: farming. It was only the beginning of his journey. Through third-party mismanagement and a run of bad luck, Jason lost most of the money he’d saved from his NFL days—the same money he’d planned to use to start his new career and donate fresh produce to hungry kids. Only a miracle could save Jason’s new dream.

And that’s exactly what happened.

▼▲
Jason Brown grew up in Henderson, North Carolina. He went on to attend the University of North Carolina, where he played both guard and tackle before moving to center. He never missed a game. He was drafted in the fourth round by the Baltimore Ravens in 2005. Brown became a free agent in 2009 and was signed by the St. Louis Rams for $37.5 million, making him the highest-paid center in the league. He was again a free agent three years later, but rather than signing a new contract, Brown left the NFL and bought a thousand-acre farm in Louisburg, North Carolina. Brown has been farming full-time since 2013, and he gives away nearly everything he grows (mostly sweet potatoes). He and his wife, Tay, have been married since 2003 and have eight children.

This riveting story of a top-earning NFL center and his family who walked away from it all to follow God's call to alleviate hunger as farmers--a life they knew absolutely nothing about--illustrates the sacrifice and ultimate reward of obedience to our heavenly Father even when it doesn't make earthly sense.

NFL lineman Jason Brown had everything he could ever want. He was the highest-paid center in the game, lived a life of luxury, and was cheered on by millions of people every week. Then, in 2012, Jason heard a call from God that changed everything. Jason turned his back on an incredibly successful career in football to pursue a new dream: ending hunger. But through third-party mismanagement and bad luck, Jason lost most of his savings from the NFL--the same money he'd planned to use to start his new career. He desperately needed the miracle that soon came.

Today, Jason and his family run First Fruits Farms in Louisburg, North Carolina, a state where one in four children don't know where their next meal will come from. Since 2014, the Browns have donated more than 1.6 million servings of fresh produce to their community. Their motto: Never stop giving. Never stop loving. Never stop growing.

With powerful and deeply personal insight, Centered is an inspiration to embrace the joy of following where God leads--no matter how crazy it sounds.

▼▲
"Former NFL player Jason Brown walked away from comfort and familiarity to accept a new calling that was out of his comfort zone. As owner of First Fruits Farm in North Carolina, Brown is known today as the Sweet Potato Whisperer. Farming has stretched him and his family yet brought them closer together and benefited countless families in need. The stories Jason shares point to a heavenly Father who loves to bless those who are obedient to His call."—James Robison, founder and president of LIFE Outreach International

"Jason Brown’s inspiring journey is a powerful self-reflection of a life filled with pride, humility, and a series of twists and turns that ultimately drove him and his family to give it all up, only to gain it all back and more, through his dramatic decision to walk by faith and follow God’s confusing and, at times, questionable calling. "—Chip Paillex, president and founder of America’s Grow-a-Row

"This story chronicles the sacrifices, trials, and ultimately the provision, protection, purpose, and blessings that Jason and Tay Brown found as they left wealth and riches to follow God’s call to serve in His kingdom. Their lives offer inspiration to everyone, and this book gives pause and a chance for self-reflection of one’s own choices and priorities."—John Mahshie, executive director of Veterans Healing Farm

"Jason tells a very personal story—from being bullied as a child in a racially segregated community to becoming the highest paid center in the NFL, then retiring at the height of his career to follow God’s calling for him. His joy and fulfillment from helping others, while overcoming his own despair when his farm was on the verge of bankruptcy, is motivating. This is an excellent read from an inspiring person."—Bubba Cunningham, director of athletics at the University of North Carolina

"Jason Brown’s journey through faith and obedience is cut straight from the Old Testament. Examples of Job, Joseph, and Daniel all come to mind as Jason rises above worldly success and acts obediently to share Christ with the hurting."—Edward Graham, Samaritan’s Purse

"Jason Brown’s story is a remarkable testament to living a life that exemplifies the true qualities most of us desire but too often fall short of attaining. At age twenty-seven, at the height of his NFL career filled with prestige, fame, and worldly fortune, he walked away from it all. Jason’s rock-solid faith led him to farming and a new life, of abundance and blessings for his family and neighbors in need, well beyond anything he could have imagined."—Joe Lamp’l, Emmy Award–winning creator and executive producer of Growing a Greener World and founder of Joe Gardener

▼▲
I'm the author/artist and I want to review Centered: Trading Your Plans for a Life That Matters.
Back
Back