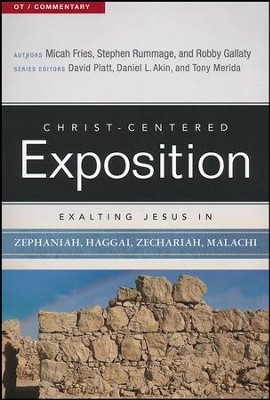 ▼▲
A Christ-centered, preaching-focused look at the last four minor prophets of the Old Testament. Presented as a sermon series, this accessible commentary features illustrations, applications, and end-of-chapter discussion questions. The readable, practical approach makes it an excellent tool for pastors, small-group leaders, or personal devotions.

▼▲
Exalting Jesus in Zephaniah, Haggai, Zechariah, and Malachi is part of the Christ-Centered Exposition Commentary series.  This series affirms that the Bible is a Christ-centered book, containing a unified story of redemptive history of which Jesus is the hero. It’s presented as sermons, divided into chapters that conclude with a "Reflect & Discuss" section, making this series ideal for small group study, personal devotion, and even sermon preparation. It’s not academic but rather presents an easy-reading, practical and friendly commentary. The series is projected to be 48 volumes.

▼▲
Micah Fries (pronounced Freeze) is the Vice President of LifeWay Research in Nashville, TN and is a frequent speaker in churches and conferences. He served as a pastor in Missouri and an international church planter. He holds a Master of Divinity and the Bachelor of Arts in Theology. While in college, Micah met Tracy, and they married in May of 2000.After college graduation Micah and Tracy moved to Burkina Faso, West Africa where they worked as church planters among the Dagara people of Burkina Faso and Ghana. Micah has served as a Senior Pastor at two churches. Micah, Tracy and their daughters, Sarah Grace and Kessed Noel,  live in Hermitage, TN and are a part of the faith family of Fairview Church in Lebanon, TN, where Micah serves as the Associate Pastor for Teaching and Mission.

Stephen Rummage is the Senior Pastor of Bell Shoals Baptist Church in Brandon, Florida, a multi-campus church with over 9,000 members in the Tampa Bay area. He is a frequent guest speaker for churches and conferences across the United States. His daily radio teaching ministry, Moving Forward, airs nationwide on Sirius/XM satellite radio. Dr. Rummage’s personal ministry vision is to teach God’s Word to transform lives. Dr. Rummage received the B.A. from the University of North Carolina at Greensboro, graduating magna cum laude. He holds the M.Div. with specialization in biblical languages from Southeastern Seminary and completed the Ph.D. in preaching and theology at New Orleans Baptist Theological Seminary. Dr. Rummage has authored or contributed to eight books. His Planning Your Preaching is used widely as a seminary and college textbook. With his wife Michele Rummage, he co-authored Praying with Purpose. He co-authored  Engaging Exposition with Daniel Akin and Bill Curtis, named "Book of the Year" by Preaching Today in 2012. He and his wife, Michele, live near Brandon, along with their son, Joshua.


Robby Gallaty is the Senior Pastor of Brainerd Baptist Church, Chattanooga, TN. He was radically saved out of a life of drug addiction on November 12, 2002. Dr. Gallaty grew up in New Orleans and was educated at William Carey University and New Orleans Baptist Theological Seminary (M.Div. Th. M., Ph.D.).  He is the author of Growing Up: How to Be a Disciple Who Makes Disciples. His upcoming book, Rediscovering Discipleship will be released in the Fall of 2015. Robby is passionate about making disciples. His discipleship ministry, Replicate Ministries (http://replicateministries.org), produces resources, videos, and materials to assist believers in carrying out the Great Commission. Robby and his wife, Kandi, are the proud parents of two sons, Rig and Ryder.

▼▲
It's one thing to know Bible stories; it's another to know the story of the Bible. It's one thing to be aware of the story's many heroes; it's another to have met the Hero himself. From the Old Testament that anticipates him, to the Gospels that manifest him, to the Book of Acts that proclaims him, to the Epistles that explain him, and to the Book of Revelation that tells of him coming again, your Bible is about Jesus. That's why I love the vision of the Christ-Centered Exposition Commentary series. It models for preachers and teachers how to proclaim—with pastoral focus and exegetical care—the beauty of the gospel from every page of Scripture.

Few things are more important for faithful biblical interpretation than reading Scripture in light of its master narrative. The Christ-Centered Exposition series aims to do just that.  In a postmodern age, these commentaries provide pastors and lay people an invaluable resource that is unswervingly committed to the authority of Scripture and the centrality of the Gospel in the Bible’s storyline.

▼▲
I'm the author/artist and I want to review Christ-Centered Exposition Commentary: Exalting Jesus in Zephaniah, Haggai, Zechariah, and Malachi.
Back
Back