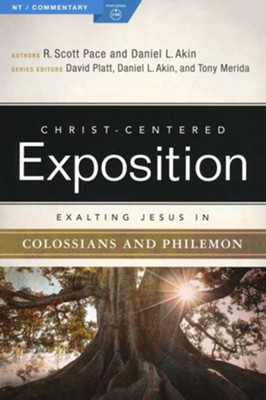 By: Danny Akin
More in Christ Centered Exposition Commentary Series
Holman Reference / 2018 / Paperback
Write a Review
Buy 36 or more for $9.49 each.
This product will be released on 11/15/21
Email me when this product is available.
Stock No: WW498100

▼▲
Dr. David Platt, President of the International Mission Board, is deeply devoted to Christ and His Word. David’s first love in ministry is making disciples, sharing, showing, and teaching God’s Word in everyday life. He has traveled extensively to serve alongside church leaders throughout the United States and around the world.

A life-long learner, David has earned two undergraduate and three advanced degrees.  He holds a Bachelor of Arts (B.A.) and Bachelor of Arts in Journalism (A.B.J.) from the University of Georgia, and a Master of Divinity (M.Div.), Master of Theology (Th.M) and Doctor of Philosophy (Ph.D) from New Orleans Baptist Theological Seminary.  He previously served at New Orleans Baptist Theological Seminary as Dean of Chapel and Assistant Professor of Expository Preaching and Apologetics, Staff Evangelist at Edgewater Baptist Church in New Orleans, and eight years as the Senior Pastor of The Church at Brook Hills in Birmingham, AL. David has written several books, Radical, Radical Together, Follow Me and most recently Counter Culture (to be released February 2015). He also has a radio program on Moody Radio, Radical with David Platt, that can be heard around the world and features past sermons and teaching from David’s ministry.

David founded Radical (Radical.net), a ministry devoted to serving churches and disseminating disciple-making resources toward the end that the gospel might be made known in all nations.

▼▲
I'm the author/artist and I want to review Christ-Centered Exposition Commentary: Exalting Jesus in Colossians & Philemon.
Back
×