The View From the Center of the Universe: Discovering Our Extraordinary Place in the Cosmos - eBook
By: Joel Primach, Nancy Abrams 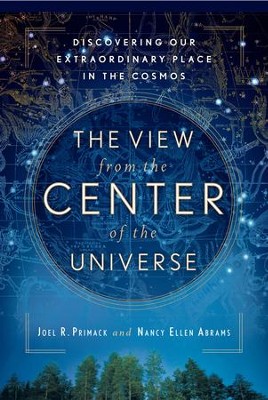 The View From the Center of the Universe: Discovering Our Extraordinary Place in the Cosmos - eBook

▼▲
In this strikingly original book, a world-renowned cosmologist and an innovative writer of the history and philosophy of science uncover an astonishing truth: Humans actually are central to the universe. What does this mean for our culture and our personal lives? The answer is revolutionary: a science-based cosmology that allows us to understand the universe as a whole and our extraordinary place in it.

▼▲
Joel R. Primack, emeritus professor of physics at the University of California, received his AB from Princeton in 1966 and his PhD from Stanford in 1970. He was then a junior fellow of the Society of Fellows at Harvard University. He is one of the principal originators and developers of the theory of Cold Dark Matter, which has become the basis for the standard modern picture of structure formation in the universe. Primack was made a fellow of the American Physical Society (APS) in 1988 "for pioneering contributions to gauge theory and cosmology." He served on the executive committee of the APS Division of Astrophysics from 2001 to 2002. He has won awards for his research from the A. P. Sloan Foundation and the Alexander von Humboldt Foundation. In addition to more than 200 technical articles in professional journals, Dr. Primack has written a number of articles aimed at a more popular audience. These include articles on "gravitation," "matter," "dark matter," "dark energy," and other physics and astronomy topics in the World Book Encyclopedia, and articles in publications such as Astronomy, Beam Line, California Wild, and Sky and Telescope, and in the McGraw-Hill Encyclopedia of Science and the Encyclopedia of Astronomy and Astrophysics. Dr. Primack shared the APS Forum on Physics and Society Award in 1977 with Frank von Hippel of Princeton for their book Advice and Dissent: Scientists in the Political Arena (Basic Books, 1974; New American Library, 1976). In 1995 Dr. Primack was made a fellow of the American Association for the Advancement of Science (AAAS) "for pioneering efforts in the establishment of the AAAS Congressional Science Fellows Program and for dedication to expanding the use of science in policymaking throughout government."

Nancy Ellen Abrams is a writer and lawyer with a background in the history, philosophy, and politics of science who has worked on science and technology policy. She has also for more than two decades closely followed her husband Joel R. Primack’s research, attended countless astrophysics conferences, and talked to almost everyone in the field. She received her BA in the history and philosophy of science from the University of Chicago, her JD from the University of Michigan, and a diploma in international law from the Escuela Libre de Derecho in Mexico City. She was a Fulbright scholar and a Woodrow Wilson designate. Her writing has appeared in journals, newspapers, and magazines such as The Bulletin of the Atomic Scientists, Environment, California Lawyer, Science and Global Security, and Tikkun. Abrams is also a songwriter who has performed at conferences, concerts, and events in eighteen countries, released three albums, and been featured on National Public Radio and television.

▼▲
I'm the author/artist and I want to review The View From the Center of the Universe: Discovering Our Extraordinary Place in the Cosmos - eBook.
Back
×
Back
×