Skip to main content
ENDS SOON! UP TO 76% OFF BIBLE SALE: Save on over 1,100 Bibles thru 1/31. >
Celtic Christianity: Ecology
Edited By: Christopher Bamford
By: William Parker Marsh
Stock No: WW6207X 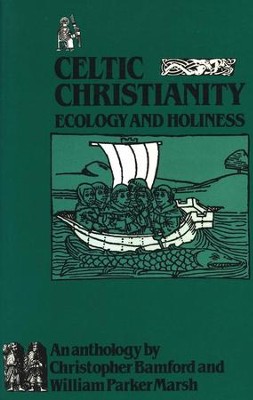 ▼▲
Celtic Christianity: Ecology and Holiness An Anthology by Christopher Bamford and William Parker Marsh by Lindisfarne Press In this anthology the stories of the Celtic saints are interspersed with verse, prayers, and sayings attributed to those ancient sages, from Patrick and Brigit, through Brendan and Columba, to Aidan and Cuthbert. We do not know when or how Christianity first arrived at those westernmost reaches. It always seems to have been there. Legend tells us that Irish bards attended the events on Golgotha 'in the spirit'. There is in the Celtic tradition a continuity in cosmic process. For the Celt, Christ's death and resurrection was a healing that made possible a reconciliation of humanity and nature in God. In this sense Christianity was always in Ireland and we seek its historical beginnings in vain. If the Celtic Church had survived, it is possible that the fissure between Chrisianity and nature, widening through the centuries, would not have cracked the unity of western man's attitude to the universe. The Celtic Christians quoted include: Patrick, Brigit, Findian, Senan of Inis Carthaig, Brendan of Clonfert, Kevin of Glendalough, Ciaran of Clonmacnoise, Mochudan of Rahen, Columba (Colum Cille), Columbanus, Gall, Fursey, Aidan, and Cuthbert. Illustrated with symbols, figures, drawings of various sites.

▼▲
I'm the author/artist and I want to review Celtic Christianity: Ecology.
Back
Back