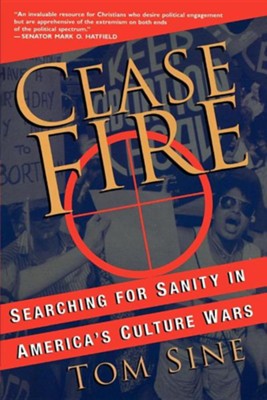 Three abortion doctors and eight aides are gunned down and six are killed. More than 150 abortion clinics are firebombed. A church is vandalized by gay prostitutes. A pro-choice activist calls for "massive militant action" against anti-abortionists.

In Cease Fire Tom Sine takes up the concerns of millions of Christians — evangelical and mainline Protestants, Catholics, and Orthodox — who feel uneasy with some of the excesses of the politically correct left but who recoil at the stance taken by Pat Robertson, Jerry Falwell, and Ralph Reed and the Christian Coalition that the extreme religious right, with its quest for political power, is the only place to turn.

Sine looks at the tactics and agendas of extremists on both sides and asks what society would look like if their particular visions were to win out. He then argues that the positions of the religious right and of the left are not the only available choices. The Bible offers a third choice, God's "better way" — a biblical center represented by neither right nor left in the current debate.

Cease Fire is written to enable readers to understand why America's culture wars are so adversarial, polarizing, and increasingly violent; to anticipate which side is likely to gain the upper hand in these contentious conflicts and how it is likely to shape our common future; and to offer a third way — a radical biblical alternative to the political ideologies of the religious right and the left — for those searching for a new place to stand in a new millennium.

▼▲
Tom Sine is a writer, teacher, and consultant based in Seattle, Washington. He is a part-time instructor at the University of Washington, an adjunct professor at Fuller Theological Seminary, and a consultant for World Concern. Among his other books are The Mustard Seen Conspiracy and Wild Hope.

▼▲
Philip Yancey
"I truly believe that the issues Tom Sine is addressing in this book are among the most important issues facing the church."

Roberta Hestenes
—Eastern College
"With his powerful and persuasive critique and challenge in Cease Fire, Tom Sine issues a courageous call to Christians seeking to follow Christ in the midst of an increasingly divisive political and cultural climate. This is an important contribution that should spark controversy and thoughtful conversation."

Martyn Eden
—Evangelical Alliance of Great Britain
"Cease Fire does not avoid conflict but rather focuses on the real enemy. The religious right and the politically correct left both serve that enemy when they hijack the gospel for their own ends. The prophetic challenge of this book is to resist that temptation — and it is timely."

William E. Pannell
—Fuller Theological Seminary
"This is Sine's best effort to date and a terribly important call, especially to the evangelical movement if it is to fulfill its role as reconciler in a fragmented society."

Brian Hathaway
—Te Atatu Bible Chapel, New Zealand
"Fascinating and disturbing reading sure to create considerable discussion. I hope that Tom Sine's call for a critical examination of both the ideology and the methodology of the left and the right will be heeded by the church. If not, then this generation of evangelical Christians, like many others before it, may be destined to continue and possibly widen the sad divisions that have plagued Christianity over the centuries."

▼▲
I'm the author/artist and I want to review Cease Fire: Searching for Sanity in America's Culture Wars.
Back