Skip to main content
Caught in the Middle
By: Regina Jennings
Stock No: WW209925 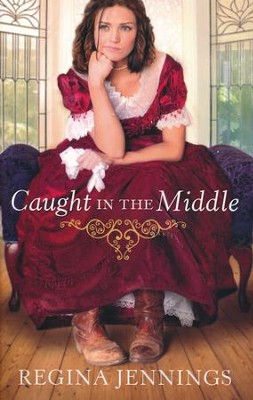 Caught in the Middle

▼▲
The train to Garber, Texas, is supposed to bring Nicholas Lovelace to the next victory in his life and career. Instead, it gets held up by robbers who are thwarted by the last person Nick ever expected--Anne Tillerton from back home in Prairie Lea.Anne's been working as a buffalo hunter and hiding from polite society. She's only coming to town to talk their runaway cook into returning. Instead, the woman flees--and leaves Anne with her infant son. With Nick the only person she knows in town who can help, the two form an unlikely team as they try to figure out what to do with the child.

▼▲
She Wants the Freedom of the Open Plains.
He Wants the Prestige of a Successful Career.
Neither is Ready for What Comes Instead.

The train to Garber, Texas, is supposed to bring life's next victory to Nicholas Lovelace. Instead, it gets held up by robbers who are thwarted by the last person Nick ever expected--Anne Tillerton from back home in Prairie Lea.

Anne's been hiding away as a buffalo hunter. She's only in town to find their runaway cook, but the woman flees--leaving Anne with her infant son. With Nick the only person Anne knows in town, the two form an unlikely team as they try to figure out what to do with the child.

But being in town means acting and dressing for polite society--and it's not going well for Anne. Meanwhile, Nick's work is bringing new pressures, and being seen with a rough-around-the-edges woman isn't helping his reputation. Caught between their own dreams, a deepening relationship, and others' expectations, can the pair find their way to love?

▼▲
Regina Jennings is a graduate of Oklahoma Baptist University with a degree in English and a history minor. She is the author of Sixty Acres and a Bride and Love in the Balance. Regina has worked at The Mustang News and First Baptist Church of Mustang, along with time at the Oklahoma National Stockyards and various livestock shows. She now lives outside Oklahoma City, Oklahoma, with her husband and four children and can be found online at www.reginajennings.com.

▼▲
I'm the author/artist and I want to review Caught in the Middle.
Back
Back