Skip to main content
NEW CYBER DEALS Save up to 90% thru 12/12  shop now >
Catholicism - An Introduction: Teach Yourself / Digital original - eBook
By: Peter Stanford
Stock No: WW63460EB 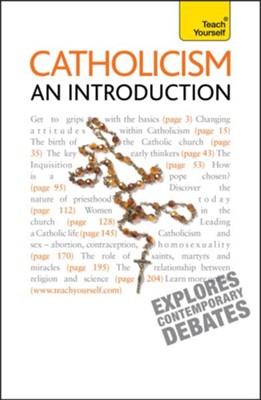 This is a complete guide to the oldest institution in the Western world - the Catholic Church. Explore the essential beliefs and practices of the religion and delve into its long and fascinating history. From the significance of Rome and the importance of the Papacy, to current issues such as science, contraception and new movements within the faith, learn what it means to be Catholic today.


NOT GOT MUCH TIME?

One, five and ten-minute introductions to key principles to get you started.

Lots of instant help with common problems and quick tips for success, based on the author's many years of experience.

Tests in the book and online to keep track of your progress.

Extra online articles at www.teachyourself.com to give you a richer understanding of psychology.

Quick refreshers to help you remember the key facts.

Innovative exercises illustrate what you've learnt and how to use it.

▼▲
Peter Stanford's previous investigations into the history, theology, enduring appeal and cultural significance of religious ideas include Martin Luther: Catholic Dissident;Judas: The Troubling History of the Renegade Apostle; The Devil - A Biography;Heaven - A Traveller's Guide to the Undiscovered Country; and The She-Pope, an investigation of the Pope Joan legend. His other books include biographies of Bronwen Astor, Lord Longford andthe Poet Laureate, C Day-Lewis, plus the polemical Catholics and Sex that became an award-winning Channel 4 series in 1992. He is a senior features writer at the Daily and Sunday Telegraph titles, and contributes to the Independent, the Observer, the Daily Mail and the Catholic weekly, the Tablet, where he is a columnist. He has presented programmes on BBC 1, Channel 4 and Channel 5, as well as BBC Radios 2 and 4 and the BBC World Service.

▼▲
I'm the author/artist and I want to review Catholicism - An Introduction: Teach Yourself / Digital original - eBook.
Back
Back