Skip to main content
SPRING CYBER EVENT STARTS NOW: And it's a really BIG deal! Up to 88% off through 5/24>
Seven Lies about Catholic History: Infamous Myths about the Church's Past and How to Answer Them - eBook
By: Diane Moczar
Stock No: WW84823EB 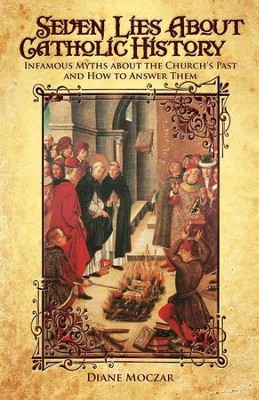 Seven Lies about Catholic History: Infamous Myths about the Church's Past and How to Answer Them - eBook

▼▲
It seems that the world hates the Church that Jesus founded, just as He said it would (John 15:18). It reviles her doctrines, mocks her moral teachings and invents lies about her history. In every age, but especially in our modern day, historians and political powers have distorted the facts about her past (or just made up novel falsehoods from scratch) to make the Church, and the civilization it fostered, seem corrupt, backward, or simply evil.

In Seven Lies about Catholic History, Diane Moczar (Islam at the Gates) tackles the most infamous and prevalent historical myths about the Church popular legends that you encounter everywhere from textbooks to T.V. and reveals the real truth about them.

She explains how they got started and why they re still around, and best of all, she gives you the facts and the arguments you need to set the record straight about: The Inquisition: how it was not a bloodthirsty institution but a merciful (and necessary) one Galileo s trial : why moderns invented a myth around it to make science appear incompatible with the Catholic faith (it s not) The Reformation: why the 16th-century Church was not totally corrupt (as even some Catholics wrongly believe), and how the reformers made things worse for everybody ...and other lies that the world uses to attack and discredit the Faith.

Written in a brisk style that is fun and easy to read, Seven Lies about Catholic History provides the lessons that every Catholic needs in order to defend and explain not just apologize for the Church s rich and complex history.

▼▲
I'm the author/artist and I want to review Seven Lies about Catholic History: Infamous Myths about the Church's Past and How to Answer Them - eBook.
Back
Back