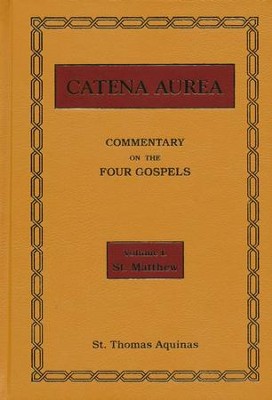 ▼▲
St. Thomas Aquinas' Catena Aurea is the masterpiece anthology of Patristic commentary on the Gospels and includes the work of over eighty Church Fathers.

Imagine a round-table discussion of the Gospels among the supreme theologians of the Church. The Catena Aurea is very close! St. Thomas Aquinas compiled this opus from sermons and commentaries on the Gospels written by the early Church Fathers, arranging their thoughts in such a way that they form a continuous commentary on each Gospel. For each of the four Gospel writers, the Catena Aurea starts by indicating the verses to be analyzed, then taking each verse phrase-by-phrase, provides the early Fathers insights into the passage.

St. Thomas Aquinas' Catena Aurea is a masterpiece anthology of Patristic commentary on the Gospels it includes the work of over eighty Church Fathers.

St. Thomas Aquinas work demonstrates intimate acquaintance with the Church Fathers and is an excellent complement to the more recent attempts to understand the inner meaning of the Sacred Scriptures. For each of the four Gospel writers, the Catena Aurea starts by indicating the verses to be analyzed, then phrase-by-phrase, provides the early Fathers insights into the passage.

The unchanging rule of the Church is that no one [is] to interpret the Sacred Scripture... contrary to the unanimous consent of the Fathers (Vatican I). Just as in our own day there has been renewed interest in the Church Fathers, so in the 13th century, when the Catena Aurea was compiled, the western church was undergoing a similar revival of interest in the ancient patristic authors and the works of many Eastern Fathers were translated from Greek to Latin for the first time. During this period there was increasing hunger for the true and authentic interpretation of Scripture, to which the Church Fathers hold the key.

St. Thomas Aquinas was commissioned to write the Catena Aurea by Pope Urban IV, in order that an orthodox Patristic commentary on the Gospels was readily available to all readers. John Henry Newman, who is widely expected to be canonized next year, was responsible for its translation into English in 1841. Cardinal Newman hoped that the Catena Aurea would become a source of catechesis within the family and the Church. Cardinal Newman's edition of the Catena Aurea is one of the jewels of the 19th century Catholic Restoration, making the scholarship of the Fathers available to a wider audience. As with many 19th century texts it employs a sober, dignified style of English, which is eminently suitable to the unsurpassable mysteries of the Catholic Faith.

The Catena Aurea, compiled by one of the Catholic Church's greatest minds, is of immeasurable use to priests writing homilies, lay people engaged in private or family study or of the Gospels and religious instructors will find it an invaluable help in preparing lessons. It is the perfect companion to study the Scriptures in detail and receive the wisdom of St. Thomas on particular passages.

Consider the Catena Aurea as a discussion of the Gospels among the supreme theologians of the Church. Their exegesis is astonishing, thorough, and without equal. Aquinas' carried this commentary wherever he went to contniually remind him of the Church Fathers' remarkable insights into Scripture.

This is the first time in more than 150 years that the English translation of the Catena Aurea has been entirely re-typeset, meaning that the text is crisp, clear and easy to read, unlike many facsimile editions.

▼▲
I'm the author/artist and I want to review Catena Aurea--Commentary on the Four Gospels, 4 Volumes.
Back
Back