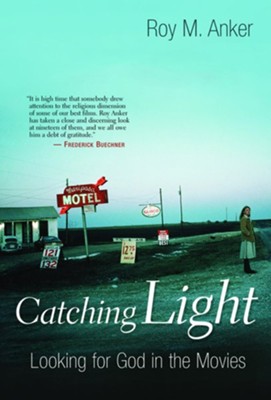 ▼▲
Instead of oversimplifying images from the big screen and using them for apologetic purposes, Anker offers a nuanced, careful reading of set design, plot, lighting, and character to see each film's connections with Christian teaching: Babette's Feast, Tender Mercies, Star Wars, The Mission, and American Beauty. 402 pages, softcover.

▼▲
Films have come to not only entertain modern minds but also inform and shape them. Many of the best cinematic works have profound religious elements -- some obvious, some more subtle. In Catching Light Roy Anker examines nineteen popular films, showing how they convey a range of striking perspectives on the human encounter with God.

These selected films portray God showing up in different, surprising ways amid the messy circumstances of life. Anker looks closely at the plot of each film, especially at how characters, through their experiences, ultimately move "toward Light," toward recognition of a loving, redemptive deity.

The first section of Catching Light looks at classic 1970s films that inspect personal, social, and cultural evil: The Godfather trilogy, Chinatown, and The Deer Hunter. The second group of films depicts the ways and depths of specifically Christian notions of redemption: Tender Mercies, The Mission, Places in the Heart, and Babette's Feast. Some of the most successful films of our time have come as fairy-tale fantasies: the Star Wars saga, Superman, and three of Steven Spielberg's "lost boy" stories (Close Encounters of the Third Kind, E.T.: The Extra-Terrestrial, and A.I.: Artificial Intelligence), each of which Anker interprets as a fable of search and redemption. The films in the last section of the book feature characters who, to their great surprise, are ambushed by a wholly unexpected God: Grand Canyon, American Beauty, and Three Colors: Blue.

In addition to focusing on the theological dimension of each film, Anker comments on its merits both as story and as cinema. Also included are sidebars that discuss each film's history and significance as well as the quality and special features of DVD editions. For anyone interested in the intersection of religion, art, and culture, Catching Light offers a unique view of contemporary faith.

▼▲
Roy M. Anker teaches literature and film at Calvin College, Grand Rapids, Michigan. His other books include Catching Light: Looking for God in the Movies and the two-volume Self-Help and Popular Religion in American Culture.

▼▲
I'm the author/artist and I want to review Catching Light: Looking for God in Movies.
Back
Back