Skip to main content
Get Christmas Ready Sale: Deals on over 1,150 titles thru 9/27.
Catch of the Day: Spiritual Lessons for Life from the Sport of Fishing
By: Jimmy Houston
Stock No: WW319640 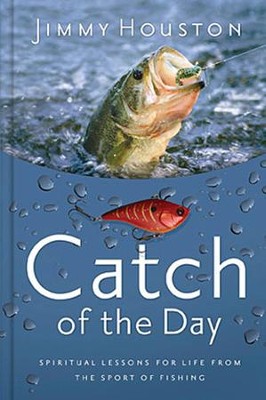 Catch of the Day: Spiritual Lessons for Life from the Sport of Fishing

▼▲
Inspiring spiritual insights on the art of angling from one of the world's most "al-luring" outdoorsmen! Combining his love of fishing and faith in God, Jimmy Houston shares a year's worth of daily Scripture verses, meditations, and fishing pointers to help you navigate the waters of life. Sure to reel you in, hook, line, and sinker!

Fishermen don’t rely on luck in order to catch fish—they put their skills, knowledge, and experience into play every time they cast their line. Likewise, righteous and godly living doesn’t come naturally but requires study, commitment, and a lot of practice. In Catch of the Day, Jimmy Houston combines his love of fishing and his love of God in this unique fisherman’s 365-day devotional.

With colorful interiors and a ribbon marker, Catch of the Day is a great gift for

Put into action the characteristics needed to be a great fisherman, and see how they can also make you into a great fisher of men. Anyone who loves God’s creation, combined with the excitement of the catch, will truly enjoy this yearlong guide of spiritual lessons for life.

Jimmy Houston, "America’s Favorite Fisherman," has been fishing on national television since 1977. His fishing show, Jimmy Houston Outdoors, is one of the most widely viewed outdoors shows on the air and is consistently ranked as the #1 outdoors show on ESPN. A huge crowd favorite at bass tournaments and over 100 personal appearances a year, Jimmy represents most of American’s top outdoors related companies, such as Bass Pro Shops, Garmin, and Tracker Boats. In 2017, Jimmy was presented a Bass Pro Shop Angler of the Century award.

Jimmy has written five books, including Hooked for Life, The Reel Line, Catch of the Day, and Caught Me a Big ’Un, which was a #1 selling fishing book. Jimmy has a growing presence on YouTube and Facebook with both his Jimmy Houston Outdoors channel and his Catch of the Day daily devotions channel. He is a deacon at Midway Hill Baptist Church near Sulphur, Oklahoma. Jimmy and his wife of over 57 years live in southern Oklahoma.

▼▲
I'm the author/artist and I want to review Catch of the Day: Spiritual Lessons for Life from the Sport of Fishing.
Back
Back