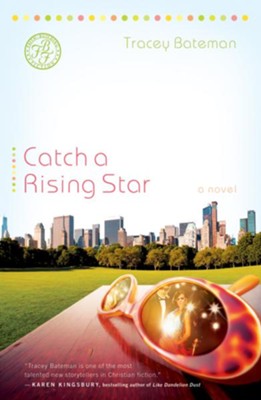 ▼▲
When thirty-something Tabby Brockman has the opportunity to reclaim her role as a killed-off character on the nation's #1 daytime soap opera, she figures this must be God's reward. But back on the set, she's faced with the same hateful head writer who killed off her character in the first place, kids who drive her crazy, a stage dad who rubs her completely wrong, and an unwanted boyfriend who can't seem to get the message. Faced with this dizzying rollercoaster of challenges, Tabby has to wonder: is she finally a star on the rise or just on the brink of another spectacular fall?

▼▲
Tracey Bateman published her first novel in 2000 and has been busy ever since. She became a member of American Christian Fiction Writers in the early months of its inception in 2000 and served as president for the past year. She lives with her husband and four children in Lebanon, Missouri. You can visit her Web site at www.traceybateman.com.

▼▲
Bateman (I Love Claire) kicks off a new series about three single 30-something roommates in New York City. The protagonist of this installment is Tabby Brockman, a struggling actress who is asked to resurrect a character she once played on a popular soap opera. It's a dream job, even though Tabby wrestles with how to be a faithful Christian on the set of such a steamy show and occasionally refuses to play a scene that she thinks is immoral. Meanwhile, her off-the-air love life is heating up, too. Tabby's mom is determined to set her up with a drippy guy who won't take no for an answer, but Tabby loses her heart to a hunky, recently widowed stage dad, whose two children play her twins on the soap. There are only two problems: Tabby can't stand kids, and her archrival, an annoying actress named Rachel Savage, appears to be after the same man. Tabby's first-person narration is chatty and fast-paced, the dialogue is snappy, and Tabby's roommates, parents and sister are all well-developed characters. The number of hospital scenes in this otherwise winsome and fun novel strains credulity, but in the realm of Christian chick lit, Bateman is a rising star in her own right. Copyright 2007 Reed Business Information.

▼▲
I'm the author/artist and I want to review Catch a Rising Star: A Novel - eBook.
Back
Back