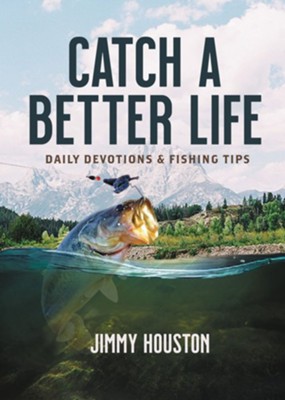 What does a fishing lure have to do with following Jesus? How can casting our lines remind us of our commitment to godly living? In what ways does the underwater world teach us about God's purposes? In Catch a Better Life, hugely popular pro fisherman Jimmy Houston shares wisdom from the Bible along with plenty of savvy fishing advice. Each entry in this 365-day devotional includes:

With its colorful photos and a presentation page, this full-color book makes a perfect gift for:

If you love God's creation--along with the excitement of the catch--and want to grow in your spiritual life, reel in this fisherman's devotional guide to following God with purpose.

Jimmy Houston, "America’s Favorite Fisherman," has been fishing on national television since 1977. His fishing show, Jimmy Houston Outdoors, is one of the most widely viewed outdoors shows on the air and is consistently ranked as the #1 outdoors show on ESPN. A huge crowd favorite at bass tournaments and over 100 personal appearances a year, Jimmy represents most of American’s top outdoors related companies, such as Bass Pro Shops, Garmin, and Tracker Boats. In 2017, Jimmy was presented a Bass Pro Shop Angler of the Century award.

Jimmy has written five books, including Hooked for Life, The Reel Line, Catch of the Day, and Caught Me a Big ’Un, which was a #1 selling fishing book. Jimmy has a growing presence on YouTube and Facebook with both his Jimmy Houston Outdoors channel and his Catch of the Day daily devotions channel. He is a deacon at Midway Hill Baptist Church near Sulphur, Oklahoma. Jimmy and his wife of over 57 years live in southern Oklahoma.

▼▲
I'm the author/artist and I want to review Catch a Better Life: Daily Devotions and Fishing Tips - eBook.
Back
Back