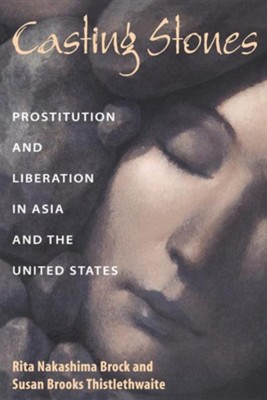 ▼▲
A stunning expose of a global sex industry that stretches from Asia to the United States, destroying the lives of exploited women and children in its path. Here two feminist theologians blend harrowing research with fresh insight into the cultural and religious notions of sexuality, power, and violence that feed the cycle. 373 pages, softcover from Fortress.

This stunning look at the global sex industry brings fresh analysis and new approaches to the baffling and complex issues that surround prostitution.

Religion and society have both cast stones at prostitutes, seeing them as archetypal sinners and blaming them for their situation. Brock and Thistlethwaite, after many years of research, travel, and interviews, offer this cross-cultural study. They compare and highlight structures that sustain prostitution as a global system of exploitation of the most vulnerable in the United States as well as Korea, Japan, the Philippines, Thailand, and Taiwan.

This structural analysis is then submitted to a theological critique of doctrines of sin and karma, the traditional rubrics under which religion (in this instance, Christianity and Buddhism) has considered prostitution. The heart of their project is rethinking the deeper cultural and religious notions of sexuality, power, and violence that undergird sexual exploitation. New approaches to prostitution through religious and social change are proposed.

Brock and Thistlethwaite make the case to all persons of conscience that prostitution is a serious social justice issue, and they suggest modes of analysis and practical ways to make a difference. They demand each reader to ask, "Who am I to cast the first stone?"

Susan Brooks Thistlethwaite, President of Chicago Theological Seminary, is a theologian and social ethicist whose many influential books include Casting Stones: Prostitution and Liberation in Asia and the U.S. (with Rita Nakashima Brock; Fortress Press, 1996), Lift Every Voice: Constructing Christian Theologies from the Underside (with Mary Potter Engel, 1998), and Sex, Race, and God: Christian Feminism in Black and White (1989).

▼▲
I'm the author/artist and I want to review Casting Stones.
Back
Back