EARLY CHRISTMAS SALE: Shop over 900 items up to 85% off through 9/29 >
The Case for Civility: And Why America's Future Depends on It
By: Os Guinness 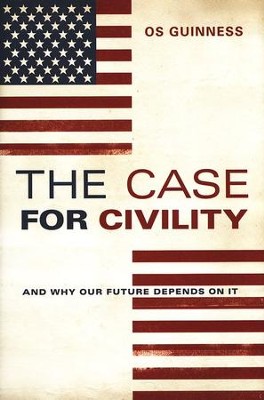 The Case for Civility: And Why America's Future Depends on It

▼▲
Have America's founding principles become culture war casualties? While the world watches, we're failing to live up to our own ideals. Calling both left and right to renounce ugly political polarization, Guinness makes an impassioned plea for a civil public square---one that neither privileges a particular faith nor excludes religion in the name of "tolerance." 224 pages, hardcover from HarperOne.

In a world torn apart by religious extremism on the one side and a strident secularism on the other, no question is more urgent than how we live with our deepest differences—especially our religious and ideological differences. The Case for Civility is a proposal for restoring civility in America as a way to foster civility around the world. Influential Christian writer and speaker Os Guinness makes a passionate plea to put an end to the polarization of American politics and culture that—rather than creating a public space for real debate—threatens to reverse the very principles our founders set into motion and that have long preserved liberty, diversity, and unity in this country.

Guinness takes on the contemporary threat of the excesses of the Religious Right and the secular Left, arguing that we must find a middle ground between privileging one religion over another and attempting to make all public expression of faith illegal. If we do not do this, Guinness contends, Western civilization as we know it will die. Always provocative and deeply insightful, Guinness puts forth a vision of a new, practical "civil and cosmopolitan public square" that speaks not only to America's immediate concerns but to the long-term interests of the republic and the world.

Os Guinness, an author and social critic, has written or edited more than twenty-five books, including The Call, Long Journey Home, Unspeakable, and The American Hour. A frequent speaker and seminar leader at political and business conferences in the United States, Europe, and Asia, Guinness has lectured at many of the world's leading universities and has often spoken on Capitol Hill. He lives in Washington, D.C.

▼▲
Popular evangelical writer Guinness (The Call) worries that the culture wars are destroying the United States. If Americans dont find a way of living with our deepest differences, the republic will decline. He forcefully defends religious liberty, noting that it was crucial for the founding generation and should be just as crucial today. To that end, he calls Christians to rethink their enthusiasm for government-sponsored faith-based initiatives, and to remember that evangelicals were the victims of earlier church-state establishments. The religious rightwhose discourse of victimization, says Guinness, is silly and anti-Christiancomes under fire. Nor is Guinness a fan of the nascent religious lefthe prefers a depoliticized faith. For all Guinnesss rhetorical vim, his proposals ultimately feel anodyne: his boilerplate conclusion is that in order to restore civility we need leadership and a remarkable articulation of vision. Furthermore, although Guinness notes that he is a European, the book is oddly marked by the old rhetoric of American cultural imperialism. Echoing JFK, Guinness wants his essay to be taken as one model for fostering civility around the world and helping make the world safe for diversity. Many readers may prefer Charles Marshs lively, provocative manifesto Wayward Christian Soldiers. (Feb.) Copyright 2008 Reed Business Information.

▼▲
I'm the author/artist and I want to review The Case for Civility: And Why America's Future Depends on It.
Back
×
Back
×