A Case for Character: Towards a Lutheran Virtue Ethics
By: Joel D. Biermann 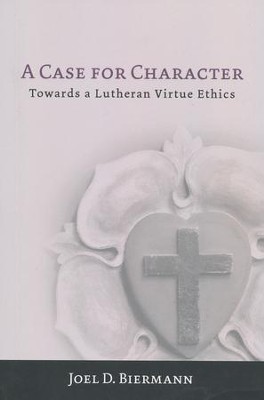 A Case for Character: Towards a Lutheran Virtue Ethics

▼▲
Over the last several decades, perceptive observers of Western civilization have documented what virtually everyone has perceived: as the old foundations of society have toppled, morality and personal character have been set adrift and often vanished altogether. How can character be cultivated when it seems no one is willing or able to provide a definitive description of character to which humans should aspire?

While the reasons for this are many and complicated, one of the more potent singular factors is actually theological, says Biermann. Contemporary Lutheranism, in particular, has struggled with the appropriate place of morality and character formation, as these pursuits often have been perceived as being at odds with the central Christian doctrine of justification.

A Case for Character explores this problem and argues that Christian doctrine, specifically as articulated within a Lutheran framework, is altogether capable of encouraging a robust pursuit of character formation while maintaining a faithful expression of justification by grace alone through faith alone.

▼▲
No doubt there has often been an antinomian streak in Christianity, but it may sometimes seem that contemporary Lutheranism has made it a central theme and emphasis. Joel D. Biermann argues that this need not and should not be the case, and he finds within Lutheranism an ethic that attends to character formation. There may be more to be said on the subject, but Biermann provides a good place for anyone concerned about this problem.
-Gilbert Meilaender,
Valparaiso University

It is an understatement to observe that Lutherans have not traditionally been attracted to any ethics that might be associated with Aristotle. Yet the language of virtue suffuses Luther's work. So it is a great good that we now have this book from Joel D. Biermann. He has done nothing less than show that an ethics of the virtues is at the heart of Lutheran theology. This is an accomplishment that hopefully will inspire further reflection within and about Lutheran theology.
-Stanley Hauerwas,
Duke Divinity School

Biermann's engagement with contemporary proposals for addressing the collapse of the Judeo-Christian moral structure in North American societies brings insights from Lutheran perspectives to speak to critical moral issues and add a significant voice to the ecumenical conversation regarding the fostering of biblical piety in the twenty-first century.
-Robert A. Kolb,
Concordia Seminary, St. Louis

Across the United States, our communities need leaders to re-articulate the importance, pedagogy, and ecology of character formation, reclaiming authoritative sources, reanimating a compelling vision perhaps lost, and rebuffing the siren song of nihilism that winds its way into the most unlikely places. Dr. Biermann's book exemplarily leads the way for Lutheran and other evangelical churches and schools by drawing on the Bible and the historic Lutheran confessions.
-Ryan S. Olson,
Kern Family Foundation

▼▲
I'm the author/artist and I want to review A Case for Character: Towards a Lutheran Virtue Ethics.
Back
×
Back
×