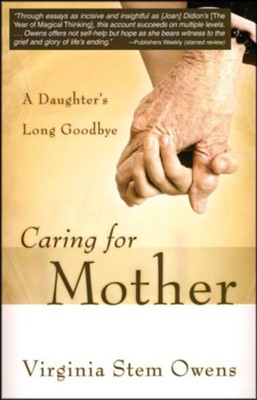 ▼▲
Virginia Stem Owens gives a moving and realistic account of the many challenges of caring for an elderly loved one. Caring for her mother as her health declined forced Owens to take a look at her own mortality, "Nothing had ever confronted so forcefully my faith that an ultimate graciousness dwelt at the heart of the world..." This book will be a helpful companion to those who have recently become caregivers, as it will give some emotional clarity and empathy. 176 pages, softcover from Westminster/John Knox.

In Caring for Mother, Virginia Stem Owens gives a clear and realistic account of caring for an elderly loved one. Along the way, Owens notes the spiritual challenges she encountered, not the least of which included fear of her own suffering and death. This book will be a helpful companion to those who have recently assumed the role of caregiver, helping them anticipate some of the emotional turbulence they will encounter along the way.

▼▲
Virginia Stem Owens has written sixteen books and numerous articles and reviews. She is member of the editorial board of Books and Culture.

▼▲
Death is never timely: it comes either too soon or too late. In The Year of Magical Thinking, Joan Didion recounts the aftermath of her husband's sudden death at the dinner table. At the other edge of the spectrum, Owens describes seven years preceding her mother's relentless descent into dementia, "God's own breath slowly leaking out through the fissures in her brain." Afflicted first with Parkinson's, then small strokes and Alzheimer's disease, Mrs. Stem eventually required round-the-clock care. Owens moved next door and spent hours every day with her: "All I could do was squat beside the avalanche, listening for any sign of life; sometimes I could hear a faint but familiar echo of her voice or gesture from under the heap." Through essays as incisive and insightful as Didion's, this account succeeds on multiple levels: medical detective story, personal memoir, flawless description, philosophical and spiritual exploration (where is the self when the brain no longer functions normally?). Owens offers not self-help but hope as she bears witness to the grief and glory of life's ending: "If love... weren't the center from which life flows, if it didn't, as Dante says, move the stars, how could we bear such weight?" Copyright 2007 Reed Business Information.

▼▲
I'm the author/artist and I want to review Caring for Mother: A Daughter's Long Goodbye.
Back
Back