Skip to main content
Captured by Moonlight
By: Christine Lindsay
Stock No: WW023000 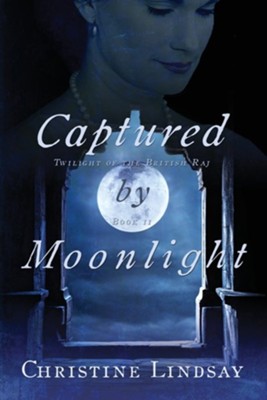 ▼▲
Prisoners to their own broken dreams... After a daring rescue goes awry, Laine Harkness and her friend Eshana flee to the tropical south of India...and headlong into their respective pasts. Laine takes a nursing position at a plantation in the jungle, only to discover that her former fiance is the owner...but fun-loving Laine refuses to let Adam crush her heart like he had years ago. Eshana, captured by her traditional uncle and forced once more into the harsh Hindu customs of mourning, doubts freedom will ever be hers again, much less the forbidden love that had begun to flower. Amid cyclones, epidemics, and clashing faiths, will the love of the True Master give hope to these searching hearts?

Tell us a little about yourself.  I was born in Ireland, and am proud of the fact that I was once patted on the head by Prince Philip when I was a baby. My great grandfather, and my grandfatheryes father and sonwere both riveters on the building of the Titanic. Tongue in cheek, I think it's fair to say that as a family we accept no responsibility for the sinking of that infamous ship.

I live on the spectacular west coast of Canada with my husband and our grown up family. My cat Scottie is chief editor on all my books--Shadowed in Silk, Captured by Moonlight, Veiled at Midnight, Londonderry Dreaming, and soon to be released Sofi's Bridge.

What was your motivation behind this project?  Stories of my ancestors who served in the British Cavalry in Colonial India inspired my multi-award-winning, historical trilogy Twilight of the British Raj, Book 1 Shadowed in Silk, Book 2 Captured by Moonlight, and Book 3 Veiled at Midnight. Londonderry Dreaming is Christines first contemporary romance set in N. Ireland.

What do you hope folks will gain from this project?  Captured by Moonlight tells the spiritual story of a woman who must die to her ambitions, hopes and dreams, and once she has put on the funeral clothes for those dreams, she is ready to live the life Christ wants her to live---His life through her. This is what I have learned in my journey as a writer, as a wife, and as a mother.

How were you personally impacted by working on this project?  The story of Eshana is so inspiring even to me, that I hope one day I can be that kind of stupendous Christian---humble yet doing amazing things for the Lord through His power.

Who are your influences, sources of inspiration or favorite authors / artists?  My biggest Christian author influence is Francine Rivers. I strive to write big stories like she wrote, with flawed characters who find out that God can change their lives only when they relinquish their lives to Him.

Anything else you'd like readers / listeners to know:  I am the happily reunited mother to my first child whom I relinquished to adoption when she was 3 days old. As of this date (Feb. 2015) I am currently writing the non-fiction account of that relinquishment and our painful reunion 20 years later. Look for that book later.