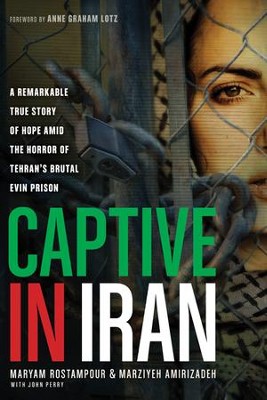 Captive in Iran: A Remarkable True Story of Hope Amid the Horror of Tehran's Brutal Evin Prison

▼▲
Despite opposition and threats, the Gospel is going forth in Muslim nations, mostly because of brave believers like Maryam Rostampour and Marziyeh Amirizadeh. The two women met while studying theology in Turkey and decided to work together when they returned home to their native Iran. Though Islamic law forbid it, in three years they distributed over twenty thousand New Testaments and started two secret house churches. It seemed like a miracle that they evaded being caught for their efforts to spread the Gospel.
However in 2009, the two women were arrested and held in the notorious Evin Prison in Tehran for 259 days. During their imprisonment they faced interrogations, intimidation, and threats of execution many times. In Captive in Iran, Rostampour and Amirizadeh share their remarkable story of survival and faith. You'll read how God used them to bring His light to one of the world's darkest places, giving hope to those who had lost everything, and facing fear with radical faith.

▼▲
Embark on a chilling journey inside one of the world’s darkest and most dangerous places: Evin, the notorious Tehran prison. Here, prisoners are routinely tortured, abused, and violated. Executions are frequent and sudden. But for two women imprisoned for their Christian faith—Maryam Rostampour and Marziyeh Amirizadeh—this hell on earth was a place of unlikely grace as they reflected God’s love and compassion to their fellow prisoners and guards. Against all odds, Evin would become the only church many of them had ever known.

In Captive in Iran, Maryam and Marziyeh recount their 259 days in Evin. It’s an amazing story of unyielding faith—when denying God would have meant freedom. Of incredible support from strangers around the world who fought for the women’s release. And of bringing God’s light into one of the world’s darkest places—giving hope to those who had lost everything, and showing love to those in despair.

▼▲
I'm the author/artist and I want to review Captive in Iran: A Remarkable True Story of Hope Amid the Horror of Tehran's Brutal Evin Prison.
Back
×
Back
×