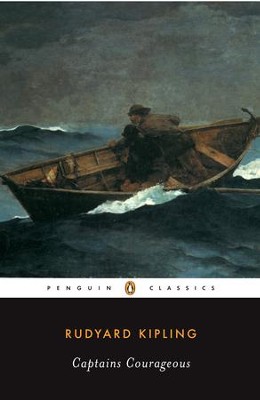 ▼▲
First published in 1897, Kipling's timeless seafaring adventure tells of the escapades of Harvey Cheyne, the son of an American millionaire who, after falling from a luxury ocean liner, is rescued by the raucous crew of the fishing ship We Are Here. Obstinate and spoiled at first, and unacquainted with life on the high seas, Harvey in due course learns diligence and responsibility and earns the camaraderie of the seamen, who treat him as one of their own. Harvey's months aboard the We Are Here provide a delightful glimpse of life at sea and well-told morals of discipline, empathy, and self-reliance.

▼▲
The only one of Kipling's novels to be cast in an American setting, Captains Courageous endures as one of literature's most cherished and memorable sea adventures. Harvey Cheyne, spoiled millionaire's son, tumbles overboard from a luxury liner--only to be rescued by the crew of a Gloucester schooner. Thus begins the boy's second voyage into the rugged rites and ways of sailors. Like all Kipling's masterworks, Captains Courageous is an interweaving of art and moral purpose. Angus Wilson has said that it shows "delicacy of craft and violence of feeling, exactitude and wile impressionism, subtlety and true innocence." A popular favorite since its first publication in 1897, the novel remains a classic story of youthful initiation--and a lively tribute to the author's famous code of bravery, loyalty, and honor among men.

▼▲
RUDYARD KIPLING was born in Bombay, India, to British parents on December 30, 1865. In 1871 Rudyard and his sister, Trix, aged three, were left to be cared for by a couple in Southsea, England. Five years passed before he saw his parents again. His sense of desertion and despair were later expressed in his story Baa Baa, Black Sheep (1888), in his novel The Light That Failed (1890), and in his autobiography, Something of Myself (1937). As late as 1935 Kipling still spoke bitterly of the House of Desolution at Southsea: "I should like to burn it down and plough the place with salt."

Kipling and his wife settled in Brattleboro, Vermont, where Kipling wrote The Jungle Book (1894), The Second Jungle Book (1895), and most of Captains Courageous (1897). By this time Kipling's popularity and financial success were enormous.

▼▲
By the Winner of the Nobel Prize in Literature

▼▲
I'm the author/artist and I want to review Captains Courageous - eBook.
Back
×
Back
×